Before the Photokina news storm we talked about the new NEX and SLT hack project. I think it’s one of the most interesting news of the year and I hope the hacker named “Someone 1.00” will succeed in delivering some interesting new features on Sony cameras. But he now needs your help:
1) To buy the third NEX camera (Click here to donate). UPDATE: Someone 1.00 just told us that they now managed to collect the necessary money!
2) He also needs developers to push the Sony hack project (Click here to read what’s needed).

And here is the link ot the firmware unpacker.

If all goes well we don’t have to rely on Sony only to get new features on current cameras. Yes, I am talking about the NEX-7 firmware update that we are all eagerly waiting for :(

And here is a new roundup of Sony related news:
The Sony Robot by Luca Rossini on Flickr.
Hood-cap for NEX with 16mm at Photoclubalpha.
Living with Sony instead of Canon or Nikon by Shawn Rabourn.
How to Get 3.5mm Audio-In on the Sony NEX-5 series (Tynan).
A58, what I’d like to see by Carl Garrard.
Our first take of the Hasselblad Lunar (Digitalcamerainfo).
Sony DSLT A99 Review by DSLR Cinematography Indonesia. Part I on Facebook.
Sony NEX-F3 test at Optyczne.pl.
Sigma 19mm lens test at Quesabesde.
A new use for the Contax T on the NEX at Magnuswedberg.

Our reader Michael (Thanks) sent us the link to the NEX-5R manual which is available here at mediafire.com. The camera worldwide shipment should start soon in Asia and ON October 21th in US according to BH. It is again BHphoto that marked the NEX-5N as “discontinued”. But the recent price drop on the NEX-5N put it on top of the mirrorless ranking. And it even managed to be on top 10 of the overall digital camera ranking…pretty much a surprise! 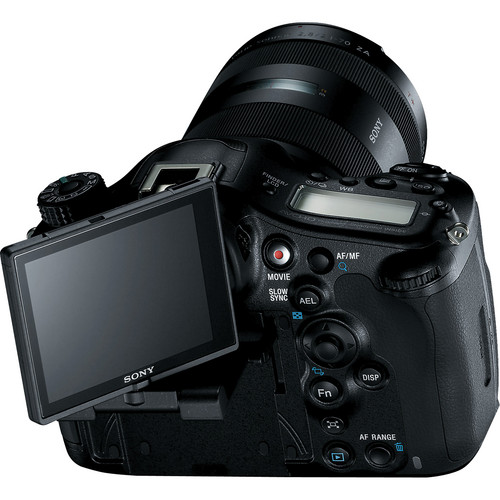 There was some buzz today because ThePhoBlogapher pointed out that “the 102 AF points will only work in the new AF-D mode of the camera which can sense depth and continuously track objects very accurately. The big news to me and the staff was that the camera only currently supports 6 lenses at this point of time.” At the time of launch the following lenses support AF-D: SAL2470Z, SAL2875, SAL50F14, SAL300F28GII, SAL70400G, SAL50050F4G.

Sony Japan just announced some changes on the newly announced RX1 FF camera. As you see from the image on top the AF-C Auto Focus option has been removed. The second change is that the Shutter Speed Priority now goes as fast as 1:4000 (before it was 1:2000).

One more news. I updated the full rpeorder option list fo the new RX1 and other Sony cameras on Alphacameradeals (including more Sonystore, BHphoto and Europe links). The RX1 for example can be preordered at Amazon, Adorama, BHphoto, and in Europe at Sonystore DE–UK–FR–IT–ES–NL–SE–FI–CH, Wex UK, Wex Germany.

A week ago I asked SAR readers to send me a list of camera suggestions. I simplified your very long wishlist in a few type of cameras to realize that poll. Please be aware that we are not going to talk about the details of the single camera yet (like price, features and so on). For now the only goal is to understand what type of camera you would need from Sony. Please be honest. Vote the camera you would really buy knowing that some of the options will be very pricey! Thanks!

Ask your friends to participate the poll! More votes we have more Sony will listen….hopefully!

Note: because you can select more than one camera the sum of the percentage will be over 100%. A percentage of lets’ say 43% close to one of the options means that 43% of all single voters that participated selected that specific option.

It’s not an Alpha nor a NEX camera but many SAR readers do own that little germ. And if you are a diver than you may be interest to know that Ikelite announced a new RX100 housing. You can get more news about it at Divephotoguide. And the big and much more expensive brother, the Sony Cyber-shot RX1 got a hands-on at Trustedreviews.