There is no doubt Sony is working on a “foveon-like” sensor. Every week we find new patents explaining the technology (Click here to read one patent example). The question now is: when are we going to see the first foveon camera from Sony? We just got an info from a new SonyAlphaRumors source. As usual take rumors from new sources with a grain of salt. That’s why the rumor has the value “SR2” (read the rumor classification explanation at the bottom of the post).

One more thing, the A770 does not have video recording feature.

Stay tuned on SonyAlphaRumors because the next few months we will see many new REAL products from Sony. That includes Alpha and E-mount lenses but also new NEX and Alpha cameras. Don’t miss any rumors. Join us on Facebook, Twitter and follow our RSS-feed!

Let’s start the week with a bit of A77 cameraporn:
A77 at DC.watch.
Sony A77 Price and Features: Soapbox Edition (Photographybay).
Exclusive: CP+ Show Full Covarage (Megapixel)
A very close up vidoe of the A77 at youtube.

UPDATE: We made a small mistake and the sources did correct the rumor. The lens is f/1.7 and not f/2.0! that’s even better ;)

Message to one of our sources “A.” -> Thanks for your help. If possible contact me using a fake gmail account. So that I can send you rumors. Bye!

According to two of my best sources the upcoming 24mm Zeiss lens for NEX should have an aperture of f/1.7 (faster the current [shoplink 3037]24mm f/2.0 for Alpha mount[/shoplink]). But the very good news (SR5!) is that new E-mount lenses from Sony and also from third party lens makers will be announced within the next 2-3months. I mean those are the REAL lenses and not prototypes…finally! I will write more about that soon!

Stay tuned on SonyAlphaRumors because the next few months we will see many new REAL products from Sony. That includes Alpha and E-mount lenses but also new NEX and Alpha cameras. Don’t miss any rumors. Join us on Facebook, Twitter and follow our RSS-feed! 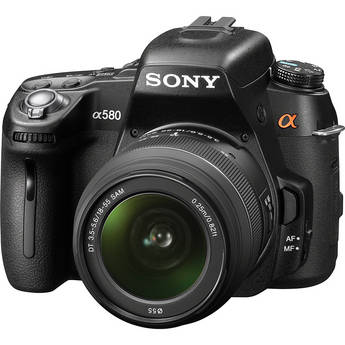 Lately we read many positive reviews about the A55 and the A580. But Techradar doesn’t agree with all of them. They tested the A580 and gave them a Overall score of 3/5 only! They didn’t like the Image Quality results: “Although the majority of images are accurate enough, the camera does have a tendency of making them a little too warm. This, together with the odd underexposure, can produce dense-looking results, although the system also shows a tendency to veer towards unexpected coldness at times, which is particularly noticeably when the same scene is shot from a slightly different perspective. In summary, the A580 is clearly capable of capturing good images with plenty of detail, but leaving it to its automated settings doesn’t always produce the desired result.”

Read the full review at Techradar and feel free to share yout thoughts about their test results.

Meanwhile ThePhoBlographer posted the third part of the A580 field review.

With the only exception of the 500mm f/4.0 (and the new lens kit announcement) Sony didn’t show new Alpha Mount lenses at the CP+ show. Don’t worry new lenses will be announced along the A77! Meanwhile Sigma announced four new interesting lenses at the Cp+ show in Yokohama. Sadly Sigma has not specified when and for which mount the lenses will be released.

A good news: Sigma Japan also announced that the 85mm f/1.4 for Sony will be available on February 11th. You can preorder the lens at Adorama. That’s a good quality and cheaper alternative of the Zeiss 85mm f/1.4 (Click here to check price at Amazon) lens.

Sony’s hold on the professional video, film, and TV markets, and its popularity among professionals in these fields (televisual)

The British journal of photography tested the Sony A55: “So why buy it? Size, weight, resolution and the GPS function make the A55 an ideal travel camera – free from unsynchronised camera and GPS clock settings – embedding data in raw files, movies or JPEGs.”

Check out the current Sony A55 price at Amazon, BHphoto, Amazon DE

Akihabara posted a set of new images and the video above directly from the Sony booth in Yokohama! You can see tons of new cool stuff like the A77 + battery grip, the Sigma 30mm E-mount lens, the professional NEX videocamera the Zeiss CP lenses for Sony and more!
P.S.: Sigma should have done the 30mm lens as fast as the [shoplink 5450]30mm f/1.4 lens which is already available for Alpha mount[/shoplink]. That would be a nice lens!

Also DC.watch posted a set of new images from the booth.

And those are the official Sony images! Click on them to enlarge!