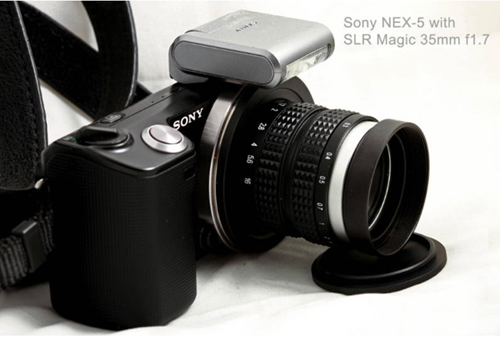 We are all waiting for Sony to release new high quality lenses for our NEX cameras. But meanwhile another lens producer is asking NEX owners if they would be interested in getting a 50mm f/1.0 manual lens. The company is SLRmagic which already made the cheap [shoplink 3514]35mm f/1.7[/shoplink] lens with E-mount. So let them know what you think!

“Nico” the administrator of the dutch fotomateforum.net claims to have found info about the A77 on Sony Scandinavia and Luxembourg websites. But before reading the rumor please keep in mind that the rumor is not from one of our trusted sources! So take it easy. This could be fake. As soon as my sources will send me reliable info I will share it here!

Update: It looks like the original post at fotoforum has been removed! I downgraded the rumor from SR3 to SR2. A source just told me he didn’t hear anyhting about a release on April 16th. So please be cautious!

My girlfriend is from Antwerp but I don’t speak dutch and she is currently outside the house. That’s why I am posting the google english translated text:

“Following the publications on the production camera pack shots we could really expect these leakages.
Previous rumors about a launch in June, September and December are thus proved untrue.
On Saturday, April 16, the Alpha 77 launched at an event in the new luxurious Monaco, Porto Montenegro.
The entire European Photo magazine press is flown.
Sony shows this clearly shows that with this new APS-C SLT competition want to inflict a crushing blow.
The Sony Alpha 77 is in the near future, along with the also launched 500 f/4.0 G SSM SAL “THE tool” for the BIF, Sports Shooter and Wild Life to be.
The Nikon D400 sensor is exactly the same 24.4Mp half years later released. This connected with the Sony sensor and Nikon agreed clause.

I ask my trusted sources if they can confirm the rumor about the A77 beeing announced on April 16! If the rumor is true than we have also the good news that Sony is finally giving priority to Sony cameras instead of Nikon cameras!
Thanks Nico for those exciting news! And come visit me in Antwerp ;)

As you know Sony announced the gold [shoplink 3003]NEX-5[/shoplink]. Now, according to our sources Sony will soon announce many new colored NEX cameras. I know this is not an exciting news but I guess this is what we have to expect to be announced at the upcoming CP+ shows which will be held in February.

There is only one anonymous source that believes a new NEX camera is coming but that rumor is rated SR2 (not reliable rumor form new source): The source claims to have seen the new NEX-7. It features a 14.1 mpx sensor, a high-res 16:9 articulating LCD screen and that t will be announced within one month! As I said, I don’t believe in this.

But before you start complaining against Sony listen carefully. I expect tons of new real products to be announced starting from the second quarter of the year! So please faith a little bit more time. I bet you will NOT regret it!

Let’s make a very short break from all those boring rumors I posted in these days ;)

David Bejarano form SonyAlpha.es gave me the link to an impressive tutorial for a homemade underwater housing for sony a55 (Author: Zolkman): http://www.sonyalpha.es/portal/noticias.item.188/fabricacion-de-carcasa-submarina-para-nuestras-alphas.html.

That thing really works! And it’s much cheaper than the [shoplink 4815]SOny NEX-5 underwater housing[/shoplink]!

This is the first picture of the new HX100v

UPDATE: Images and text have been removed form the originial website!

I repreat once again. Even if this is a non ralted Alpha or NEX news it will be very interesting to see the two most exciting features those cameras will bring. Ultrafast 0.1 sec contrast autofocus (as fast as the [shoplink 4718]Panasonic GH2[/shoplink]) and the incredible 1080p60 (or 50) 28mbit/s video recording!

I don’t speak Chinese but Hong Kong readers sent me two link to Sony lenses that just have been discontinued! If the “rumor” is correct Sony will stop selling the DT 18-250mm f/3.5-6.3 and the 300mm f/2.8 G lens! As usual take that info with a grain of salt. I didn’t hear anything from my sources about possible successor for those lenses.

I just received a short message from one of my anonymous sources: “A77 packshots are ready and currently being reviewed by management!“.

The source is reading us….feel free to ask him whatever you want to know about the A77. Hope he can/will answer your questions!

Things we know about tha A77:
– 24 megapixel sensor
– FullHD
– New advanced OLED(?) EVF
– UNCONFIRMED -> There were rumors (and also a Sony patent) about some kind of hybrid viewfinder ( a là Fuji X100 (Click here to see that camera on Amazon)

cards, of which you can use two at the same time.
– With the new battery you can take around 1.000 pictures.

P.S.: Paul Genge of Sony UK said that “this camera will include such high specification features that current [shoplink 3228]A700[/shoplink] owners will be amazed”

P.P.S.: We have a new facebook page! Join us at http://www.facebook.com/sonyalpharumors!