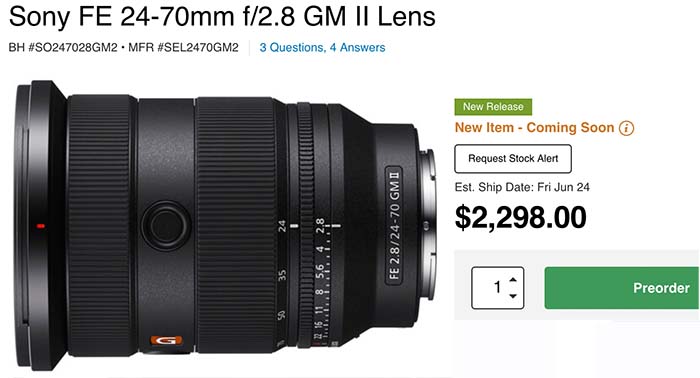 You can criticize Sony for replacing a lens it originally billed as future-proof, but the new FE 24-70mm F2.8 GM II is a worthwhile upgrade. First and foremost, it’s easier to carry—Sony has come a long way with miniaturization since it tipped the GM system. This slim zoom joins svelte lenses like the FE 70-200mm F2.8 GM II OSS, FE 50mm F1.2 GM, and FE 24mm F1.4 GM, all of which made us rethink how hefty well-corrected, bright aperture lenses should be. The redesign also adds useful on-lens controls for photo and video, something missing from Sony’s first take.

Internally, there’s a fresh optical formula that performs a bit better than the original on Sony’s most demanding camera sensor, the 60MP chip in the a7R IV. Furthermore, dual linear motors make focus performance a bit snappier, and picture quality is a little better than with the older lens. Aside from a bit of focus breathing, we don’t have many criticisms about the optics.

Despite excellent optics, the original FE 24-70mm F2.8 GM didn’t quite earn our Editors’ Choice award when we reviewed it, and it’s now a bit behind the times in terms of controls and design. You can still buy it for around $2,000, but we recommend you spend more to get the GM II—it’s a standout lens, and an Editors’ Choice winner.

There was absolutely nothing wrong with the original edition of Sony’s G Master trinity standard zoom, but the second incarnation is even better in every way. It packs a host of new features, improved handling characteristics and a completely redesigned optical path into a smaller, more lightweight build. It’s more comprehensively weather-sealed as well. The GM II is undeniably pricey, but you get what you pay for and more besides.