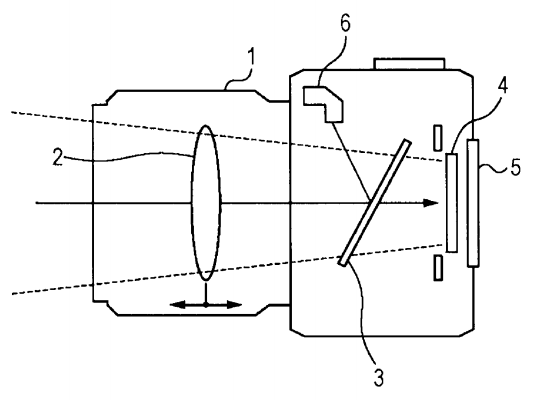 Sony just filed a new patent which discloses a new translucent camera design. It looks like Sony wants to create a sort of [shoplink 3003]NEX[/shoplink]-Translucent hybrid camera ;)
UPDATE: The patent clearly shows a A-mount camera (not a NEX E-mount).
Sony wants to get rid of the electronic viewfinder to reduce the size of the new SLT camera. The new camera looks like a NEX camera although it will be certainly be much thicker because of the semitransparent mirror.

“In recent single-lens reflex digital cameras, a display such as a liquid crystal display (LCD) panel is disposed on the back of a camera body such that an image inputted to an image pickup device can be viewed using the display. For example, there has been proposed a single-lens reflex digital camera, having no optical viewfinder, that allows a user to take photographs while the user checks an image using a display disposed on the back of a camera body. In such a structure, an autofocus detecting device is disposed at an upper position in the camera body and light reflected by a light-beam splitting mirror can be guided to the autofocus detecting device. However, when light-beam splitting mirrors disclosed in Patent Documents 1 to 4 are used, the light quantity of transmitted light guided to an image sensor is increased compared with that of reflected light to improve the quality of photographed images. As a result, the light quantity of photographing light guided to an autofocus detecting device becomes insufficient.“….”The present invention can provide a light-weight small-size digital camera.”

As usual keep in mind that patents are not real products (for now)!