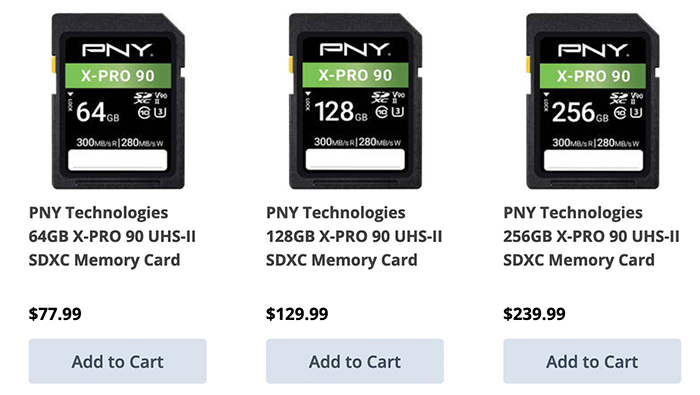 The new PNY cards are now available for BHphoto, Amazon and Adorama.

PNY has just announced the X-PRO 90 line of UHS-II SDXC memory cards, designed to keep pace with the increasing rigors of high-resolution still and video capture. Available in 64, 128, and 256GB capacities and harnessing the power of UHS-II to reach write speeds up to 280MB/s and read speeds up to 300MB/s, the X-PRO 90 is a solid card whether your job requires capturing bursts of raw stills or recording uninterrupted 8K video.

The UHS-II bus can be operated in two modes: Half Duplex or Full Duplex. For maximum speed, Half Duplex mode uses both rows of pins to transfer data in the same direction to reach the maximum speeds noted above. In Full Duplex mode, each row transfers data in the opposite direction so you can send and receive at the same time at half speed. The X-PRO 90 features a V90 speed class rating, which means its minimum read/write speeds never drop below 90MB/s for extended recording. Note that, to achieve the fastest speeds, you have to use a device that supports UHS-II.

Equally suited for stills or video, with a great performance and handling extremely well, the Sony A7 IV has a lot going for it. Yes, it’s the most expensive of its peers, by which are meant the full-frame options of up to 33MP, but it is a hybrid camera that does tackle both stills and video in the one package.
The handling is excellent, and the only questions regard the menu style, which may or may not suit the user. Familiarity will help no doubt, but the overall set-up is, in this reviewer’s opinion, somewhat over-complex.
In summary, a very high-quality package that should consistently deliver the highest quality of results – ‘Highly Recommended’.

Photographyblog tested the A7IV and concluded:

The Sony A7 IV represents a major upgrade from the popular previous model, but increased competition and a major price-hike means that it’s no longer our default choice as the best entry-level full-frame mirrorless camera.

That’s largely because it no longer has an entry-level price-tag. £2399 / $2499 for the body only is significantly more than the £$2000 launch price that the A7 III enjoyed. OK, so the camera market and the world as a whole have changed somewhat since then, but it’s still a big increase that makes the A7 IV more expensive than all of its main rivals.

Back in 2018, the Alpha A7 III faced very little competition at all, with Canon, Sony and Panasonic all still to join the 35mm full-frame market. Fast forward to 2021 and the new A7 IV has several very capable main rivals, including the the Canon EOS R6, Nikon Z6 II and Panasonic Lumix S5, not to mention the venerable Panasonic GH5 II, all of which are cheaper than Sony’s new camera whilst offering, for example, faster burst rates or uncropped 4K/60p video.

What Sony have succeeded in doing is pushing the boundaries of what we can expect from what they still consider to be their entry-level camera – the Sony A7 IV clearly out-performs its predecessor by some margin in virtually every regard, no mean feat given how far ahead of its time the A7 III was.

And while each of its rivals can point to a few key areas where they win the day, none of them quite deliver the accomplished all-round stills and video package that the A7IV clearly is – if you can only afford one hybrid camera to meet all of your diverse shooting needs and your budget stretches beyond “entry-level”, the Alpha A7 IV should be at the top of your list.

All of which is quite a roundabout way to conclude that the new Sony A7 IV is a very capable hybrid all-rounder that should more than meet the needs of most videographers and photographers alike. Whilst it has a few foibles that we hope Sony will address next time around, for us and many others, it’s well worth venturing beyond entry-level to enjoy everything that the Alpha A7 IV has to offer.

And here is Lensvids review of the new A7IV:

Note: When sending a pic feel free to also add a link to your site to promote yourself! And please do share one single picture per week only. Do not spam :)
ipt async src=”//www.instagram.com/embed.js”>

Note: When sending a pic feel free to also add a link to your site to promote yourself! And please do share one single picture per week only. Do not spam :)
ipt async src=”//www.instagram.com/embed.js”>

Jordan and Chris selected the best and worst gear of the year:

We got a new Tilt Lens from Gizmon. Here is the Press text:

Win a Sony at SonyMirrorlessPro.