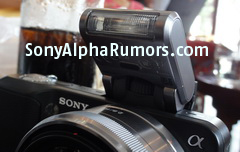 We just received the two pictures from an anonymous sender. He spotted the Sony mirrorless camera inside an asian pub!
The pictures shows the Sony NEX3. The lens is the 16mm f/2.8 pancake lens. As we told you days ago the lens is chrome finished and has a diameter of 49mm. The lens is bigger than the Olympus 17mm f/2.8 Lens (37mm)

.
UPDATE: A second source told me that “the main reason for in lens stabilization is the video mode, which is easier to implement with proper focusing, not to keep the body shallow. ”

.
Both cameras will feature the new 14 Megapixel Sony ExmorHD sensor.

Resumee of all leaks and rumors:
– The latest official Sony video (gave us some details about the cameras like 1920x1080p recording)
– Sony promotes the mirrorless cameras for the FIFA World Cup
– The rumored specs of the NEX3 and NEX5 cameras