David Oastler tested the new A64000 to see if it had some overheating issue. Luckely he encountered no issues at all.

Photogaphyblog tested the A6400 and the conclusion is rather mixed feeling:

Ultimately, the new Sony Alpha A6400 is a frustrating camera – outstanding in some aspects, most notably the AF system, good in others, but mediocre in some key areas by today’s high standards. Overall, it’s still a good bet, especially if you shoot a lot of moving subjects, but it also could potentially have been so much better…

Testing the real time tracking AF on the Sony A6400, videos and samples (Enthusiastphotoblog).

Dxomark tested the A6400 sensor and there is really a small difference:

Anyone comparing the Sony A6300 and A6400 will find the results intriguing. Although the two models share a similar sensor resolution (pixel count) and the overall results are very close, the measurements are not identical.

Despite its slightly higher noise floor over the A6300, the new A6400 sensor performs well, combining a wide dynamic range over a highly useful range of ISO sensitivity settings and excellent low-light ISO capabilities. Although that directly impacts the color depth, the A6400 remains capable of delivering extremely pleasing images. Combine those attributes with the new AF system, 11fps continuous shooting, and a relatively affordable price, and you have a very enticing camera for sports and action photographers on a budget. 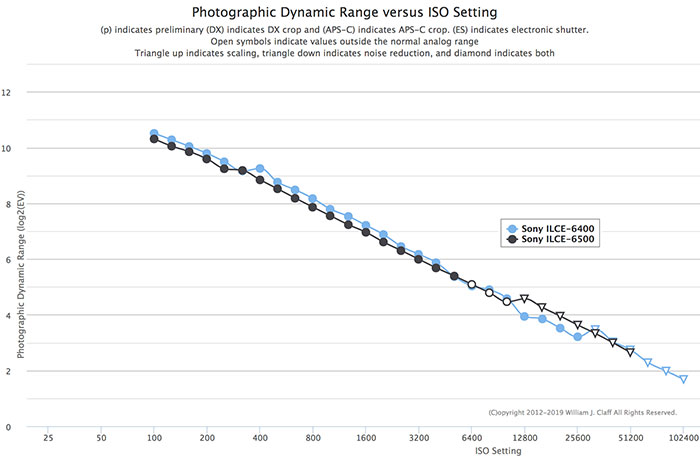 Photonstophotos tested the sensor performance of the new Sony A6400. And the good news is that Sony managed to squeeze out some more Dynamic Range from their 24MP sensor compared to the previous Sony A6500.

Now let’s see what kind of improvement the new A6500 successor will bring us once Sony decides it’s time to beat the hell out of the Fuji X-T3 :)