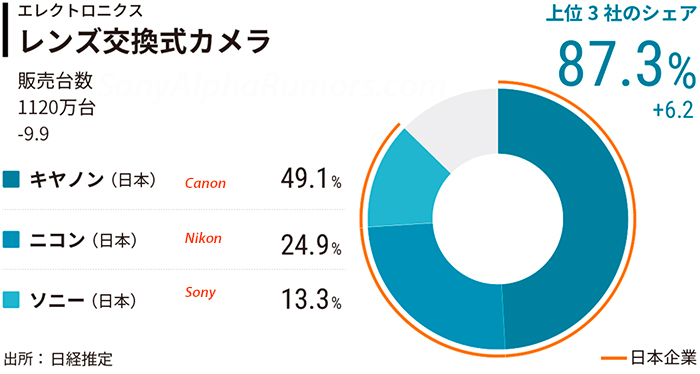 This is a perfect time for Sony to think about their future 5 year strategy within the camera business. And let’s start with a negative note:

Sony was the only Full Frame mirrorless system (except the expensive Leica system) in the market. But even with that unique distinctive character Sony did not manager to get much closer to Canon and Nikon in terms of market share. In Japan it’s Canon that is leading the mirrorless market (big surprise). And worldwide Canon has 49%, Nikon 25% and Sony only the 13% of the system camera share.

Now that the distinctive “mirrorless” advantage argument is gone Sony has to move on and lead on other aspects. I am summing up some of the ideas I got from SAR readers comments:

Be always one year ahead with sensor tech
Sony has to take fill advantage of their class leading sensor development. It means that as soon as a new sensor is available they should release a camera with it.

Fix the usual quirks
Internet is a bitch. If you claim to have a weather sealed camera and in fact it’s not…it quickly gets debunked and you get embarrassed. I understand no camera is 100% weather sealed but at least be on par with the competition. Also other issue like star eating have to be fixed ASAP.
Improve menu, ergonomics based on photographers feedback and don’t be afraid to make a major revolution (see Hasselblads X1D cool menu).
And don’t cripple on features: Touchscreen should not have just basic functions, if you use two SD slot don’t cripple the speed on one of the two slot. It simply makes you look “cheap”.

Think Social (APP store)
Older people tend to stick with the classic Nikon and Canon brand. Better to focus on the new social generation. Please let the cameras have a built-in APP store. Let people give a chance to be creative with your camera by developing special filters app and so on. It also would allow to have a ton of practical features. Example: On the fly image backup on google drive.
Hardware should be social too: This means selfie screen on all cameras!

A post shared by Andreas Photography world (@andrea_pizzini_photographer) on Aug 3, 2018 at 6:53am PDT

Product diversification
I understand that you save costs by having the same body design on all A7-A9 series cameras. But I think it’s time to give people a palette of choice. Fuji does it: They offer rangefinder styled camera, classic and more modern designed cameras. It would love to have a [shoplink 23713 ebay]Zeiss Ikon digital E-mount camera[/shoplink]! I know this wouldn’t sell much but it would attract some attention and maybe bring other people on board that otherwise wouldn’t join.

Convince Olympus-Panasonic-Pentax to join E-mount
Olympus, Panasonic and Pentax are struggling with their systems. Invite them to join E-mount. This would lead to new innovation and diversification. I would love that to happen!

More products and more announcements
Create constant interest on E-mount. Like Fuji you should have an announcement nearly every month (products or major firmware update). Also create teaser for it to attract interest!