Since the introduction of the E-mount (formerly NEX) system Sony has struggled to offer a maximum power from a minimal body. There is no doubt that they succeeded pretty well in this respect.

I have bought my first E-mount camera (NEX7) five years ago and coming from DSLRs I had to learn how to cope with the petite size of the body. Still now, some forty thousand pictures later, I am fighting with what I feel as an insufficient size of my E-mount bodies. I kept adding various L-plates and grips to them in order to increase their height and to solve the insufficient battery capacity as well. As a glass wearer I also fought heavily with the small eyepieces on the EVFs. The well-known overheating problem has never been an issue to me as I am not a video guy, but it should be mentioned too.

The question for me was: could an increase in the size of the body help to solve at least partly these problems? How big should such camera be? 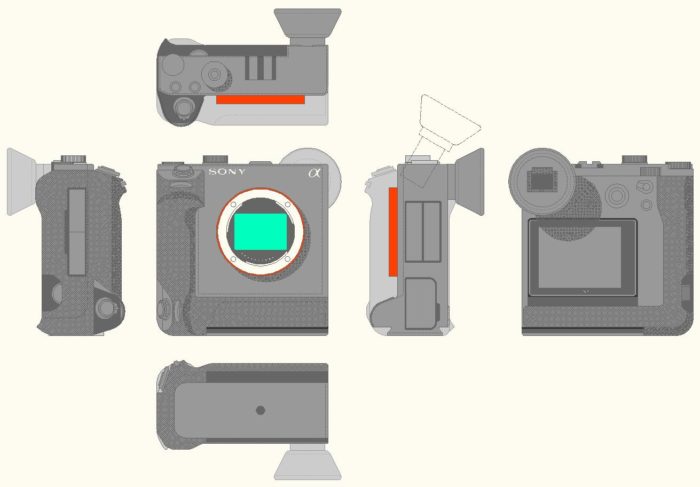 I am fully aware that a camera design is a complex task requiring lots of information and experience that I simply don´t have. My approach has been to start with an existing product and to modify it to meet my requirements. As the A7ii series body has a size large enough to accommodate a full frame sensor with an IBIS system I took it as a basis for my effort, but my design could have been based on the A6500 with the APSC sensor as well. In guessing the size of the A7ii internal parts I relied on what I found in the camera teardown documented in the very instructive text and pictures posted at Lens Rentals.com by Roger Cicala.

My proposal is based on a design of a square body with two more or less equally sized and shaped grips. Not an assembly of two separate parts, but one solid monocoque piece. This alone is nothing new. The really big professional cameras like Canon 1Dii or Nikon D5 use the same logic. Such body still remains distinctively smaller compared to these cameras, not exceeding the horizontal dimensions of an A7ii body. Its height is about the same as its width. This basic decision allows many further changes in the camera layout.

The larger body can not only provide enough space for the IBIS system, but given a magnesium construction it should also support heat dissipation and help to solve the overheating problem. Larger surface of the back and both sides of the camera offers enough space for an increased number of dials, buttons, card slots, ports and jacks. 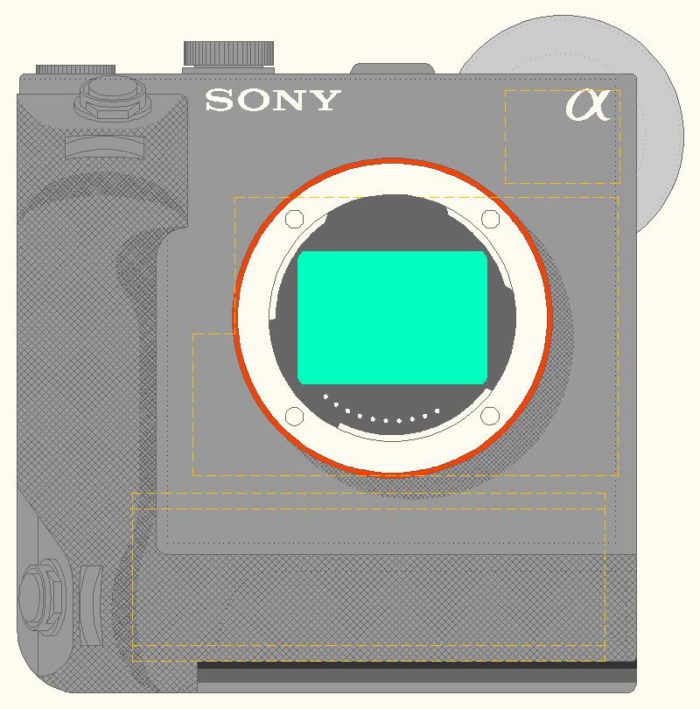 Compared to a standard body the lens the lens mount is moved down to an equal distance from both grips. This shift gives the same distance between the lens axis and the grip in both shooting orientations and leaves in the upper part of the body space for a built-in EVF. I personally prefer this arrangement to the viewfinder hump of the standard A7 series. 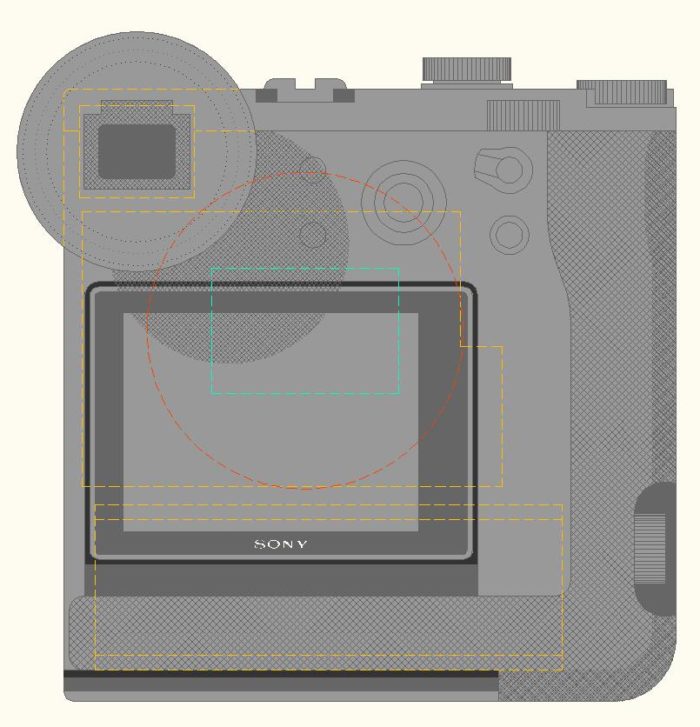 The viewfinder is integrated into the left upper corner of the body. The standard LCD is placed in the middle of the body, allowing for the use of large eyecups on the viewfinder and avoiding collisions of a tilted LCD with a tripod. Eventually a larger LCD could be used too.

My proposal includes a rearrangement of the dials and buttons on the camera back. All basic ones are moved to the upper part of the body where they are easy to reach by the thumb of the right hand and protected against unintended use. The palm of the right hand can thus firmly grasp the camera. The larger surface of the body could easily accommodate even a larger number of buttons if necessary. 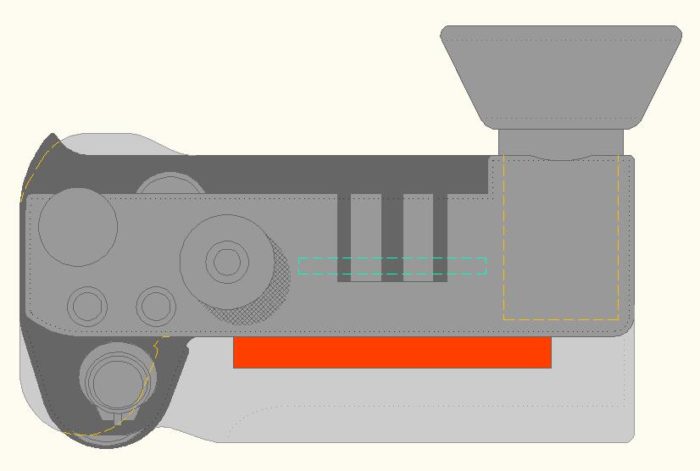 The top of the body could be arranged in many ways. I have opted for a rather conservative set-up combining the present A7ii and A6xxx lines. 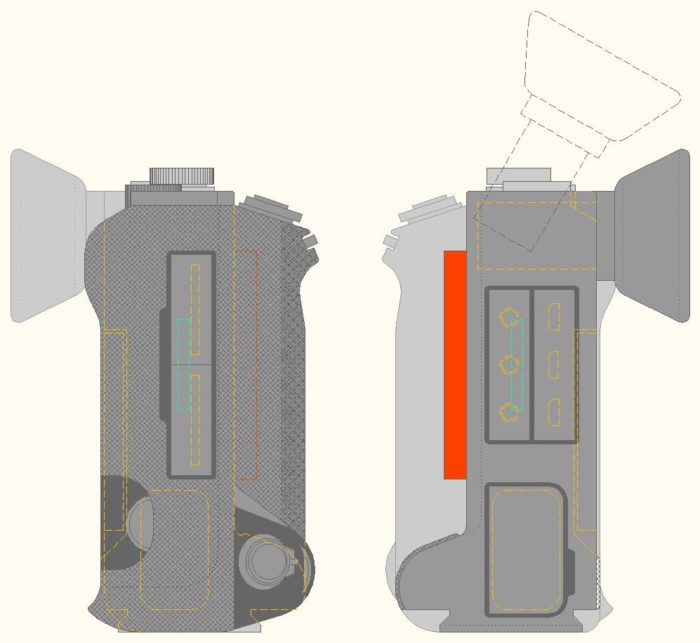 The right hand camera side can easily include two (or even more) card slots in the grip. The left hand side of the body is dedicated to doors covering USB, HDMI and other ports. There is also enough area for microphone and headphones jacks. The battery door is placed in the bottom of this side, covering a space for two standard NP-FW50 batteries or, still better, a new large double sized battery with an increased capacity. The battery is rotated 90 degrees compared to what we can find in the Sony VGC2EM grip. This arrangement frees the front parts of both grips of any internal functions so that they could be easily shaped to offer an ergonomic optimum. A tilting EVF is one of the possible options. 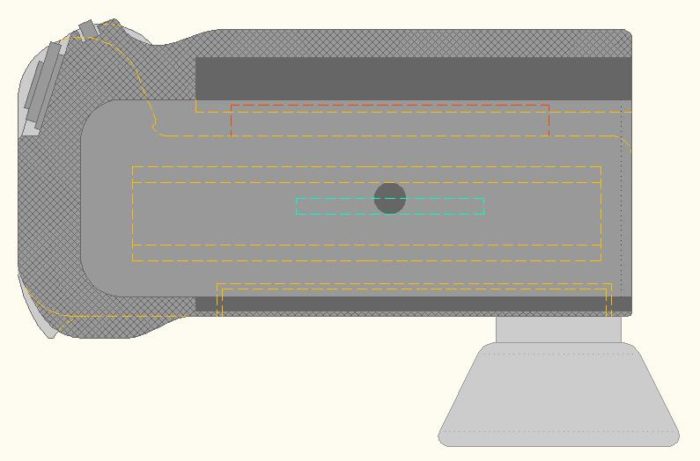 The bottom of the camera body is flat and free of any openings and doors with the exception of a tripod socket hole. My suggestion is to integrate an Arca Swiss plate profile into the bottom grip.

As a rule of thumb I would say that the proposed body shouldn´t be heavier than a comparable standard body with an attached standard vertical grip. It is not larger either. The weight would depend on the internal structure of the body, materials and image technology used. Theoretically just by joining two pieces into one you should be able to save some material and weight. I would like to say the same about the price, but I am aware of the fact that this would be probably a small series product and hence the price would be higher. Even if a lot of the A7ii series standard parts could be used.

I believe that a reasonably larger body would help to solve many of the present shortcomings of the A7 line. To me the ergonomic factor is decisive and the improvement clear. My amateur attitude might have led to some mistakes and inaccuracies. I deeply apologize to the SONY professionals for my imperfections and hope they are not crucial. I tried to be as serious and cautious as possible.

The struggle for the smallest possible camera body is not as important as it seemed to be several years ago. Those who want a real minimum already use their smartphones. For those who need something more but still really small Sony offers the Cyber-Shots in the RX and HX series. None of the E-mount cameras (including the APSC line) with the new decent lenses are truly pocketable anymore. With those facts in mind I believe it could be about time to loosen the dictate of the minimal size paradigm and to look around for other options.

What I am presenting is just a sketch, not a serious design. I would like to believe that this shape of body could find its users. It is by no means intended to compete against the popular standard E-mount bodies or even to replace them. It could simply extend the scope of the E-mount line. Any name for it? May be A7L or A7C with the C standing for comfort would be appropriate.