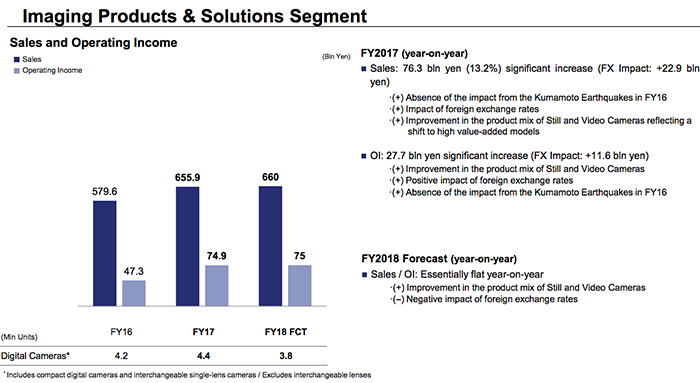 Sony issued the full 2017 Fiscal year report and there is only good news to share. Engadget sums it up:

Sony’s latest earnings reveal a simple truth: former CEO Kaz Hirai left the company in a relatively good position. In the full year leading up to March 31st, 2018, the company raked in revenue of 8,544 billion yen (roughly $78.1 billion) and operating income, or profit, of 734.9 billion yen (roughly $6.7 billion). The latter figure is a huge improvement over the $2.6 billion it managed to pull in last time. The bump, however, was expected; in the last financial year, Sony’s camera imaging business was rocked by the 2016 Kumamoto earthquakes. Now, that crucial division is back at full strength.

This is the Sony statement about the Imaging Business results:

Forecast for the fiscal year ending March 31, 2019
Sales and operating income are both expected to be essentially flat year-on-year, primarily due to the expected negative impact of foreign exchange rates being substantially offset by an improvement in the product mix of Still and Video Cameras reflecting a shift to high value-added models.