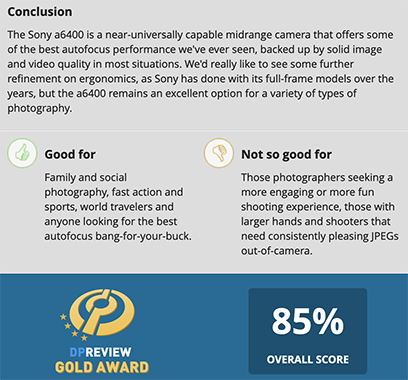 Dpreview just published the full Sony a6400 review. The camera earned the Gold Award and this is what the DP team writes:

The story of the a6400 is really all about the autofocus system. With a high-quality lens attached, the a6400 is a dream camera for casual portraiture. I don’t love the ergonomics, but when you hardly have to fiddle with any buttons to get the shot, these sorts of handling frustrations matter much less.

The a6400 is an unprecedentedly capable camera for its price point. Parents, enthusiasts and pros alike will appreciate the class-leading pro-grade AF system that’s also simple enough to use you can just ‘set and forget’. Image quality is up there with the best. Detailed 4K video and easy tap-to-track autofocus makes for a compelling run-and-gun video camera, though you’ll want to stick to stabilized lenses. To sum up: the a6400 truly impresses and is arguably more capable than many cameras at far higher price points. My only concern is its usability: I often find myself using it more as a point-and-shoot, although this isn’t necessarily a bad thing.