This is a guest posy from Dierk Topp:

A few days ago I saw a great tutorial about achieving high ISO images with low or almost no noise. I found it at lenswork.com, my favorite photo site with incredible picture series. The link to the tutorial follows at the end.

In astro photography this method seems to be very common, but using it for any hand held shooting is something different.

The main idea is, that by stacking multiple shots of exactly the same scene or object the different noise patterns of the images get combined and disappear. This can be very effective with high ISO and especially with small sensors. You set the camera on Hi continuous shooting and shoot a series of pictures. You will get a feeling for the amount of pictures depending of the exposure time it may take a while.

I got so exited, that I went out and started shooting the Christmas tree in front of our beautiful townhall with up to ISO 6.400. After learning the processing in PS I found, that I should try even higher ISO the next day. The problem that day was, that it was very windy and the tree and the flags where moving a lot.

When is this technique a useful option?

* obvious: when you don’t have your tripod or can not use it or it is forbidden
* when it is not enough light for hand held shooting with low ISO even with open aperture and OSS lenses and/or IBIS camera
* when the scene is not static enough (obvious: not usable for street shooting)

The workflow
* I compared the normal shutter with the silent shutter and found a small advantage of the normal shutter
* I did not do any editing in LR, only the standard settings (for example sharpening)
* I tried to reduce the croma noise but found, that the results get softer
* make sure, that you synchronize all images
* load the images into Photoshop as layers
* I use LR and export the images to PS as layers.
* in PS I select all layers
* edit: Auto-Allign Layers
* layers: smart objects -> convert to smart objects
* layers: Smart Objects -> Stack mode -> Mean
* crop image to eliminate some empty space at the edges from camera moving during the shooting

After the first tests I made an action in PS and now I just have to start the action and can do something else. It takes some time for processing many 42 MP images on my system :-)

The first images where made on a trip to the Hafencity and Christmas Market in Hamburg.
Click on the images for higher resolution and a better impression of the incredible improvement of the technique!

Next images from the Hafencity are all made at ISO 10.000 and stacked from 12 shots
It was late at about 11 PM and very dark and the sky was illuminated from the city but looked much darker than on the pictures after the processing. 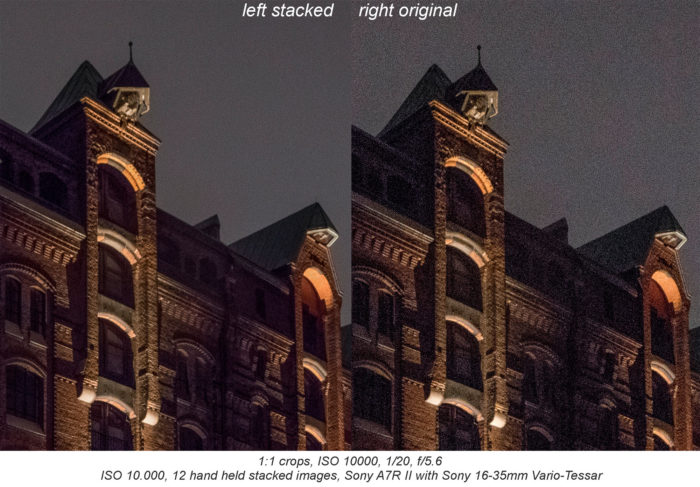 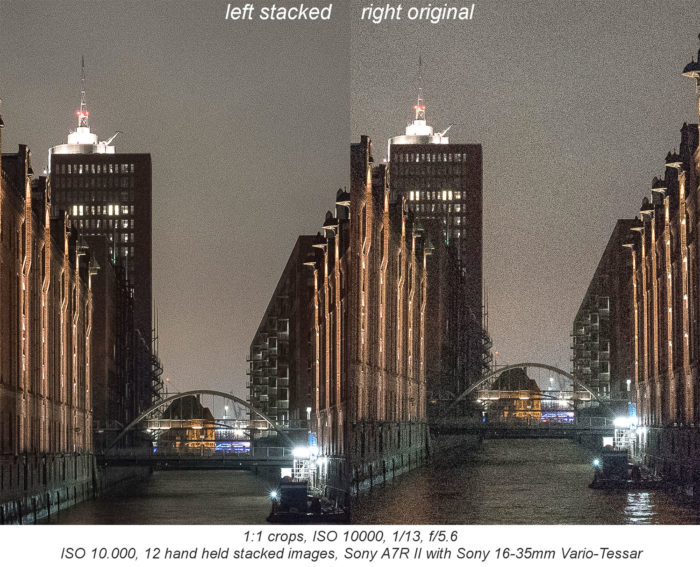 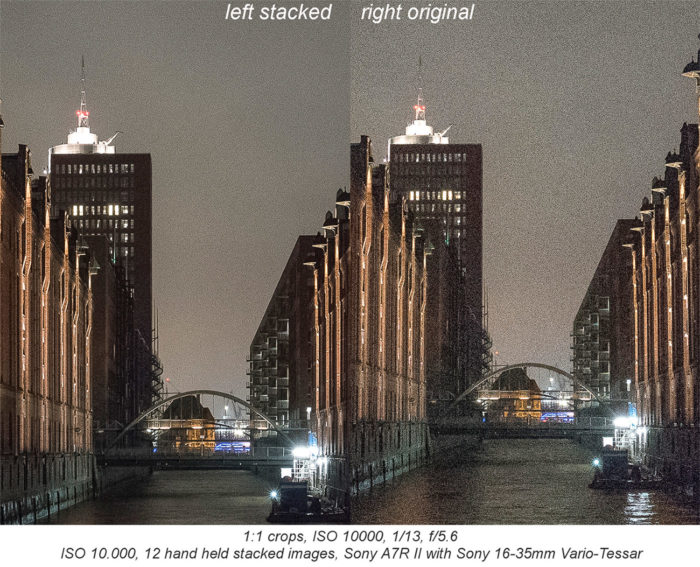 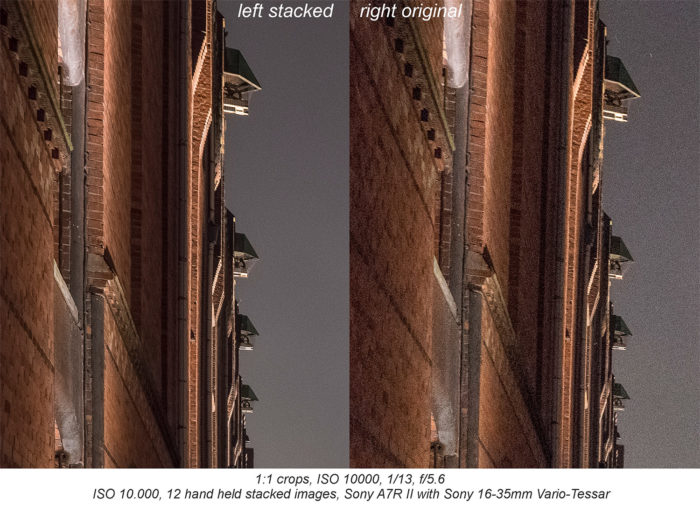 next image is the Christmas Market in Hamburg
the flag in the foreground looks almost like a long time exposure, hand held! 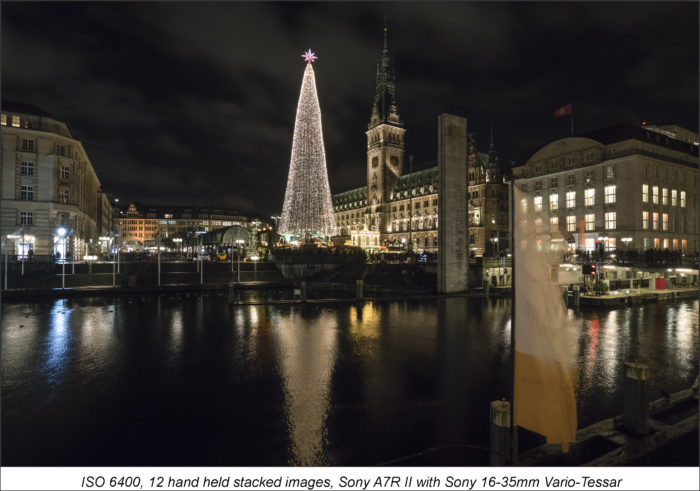 a 1:1 crop comparing the result on the left and one of the original images on the right

This is the set up 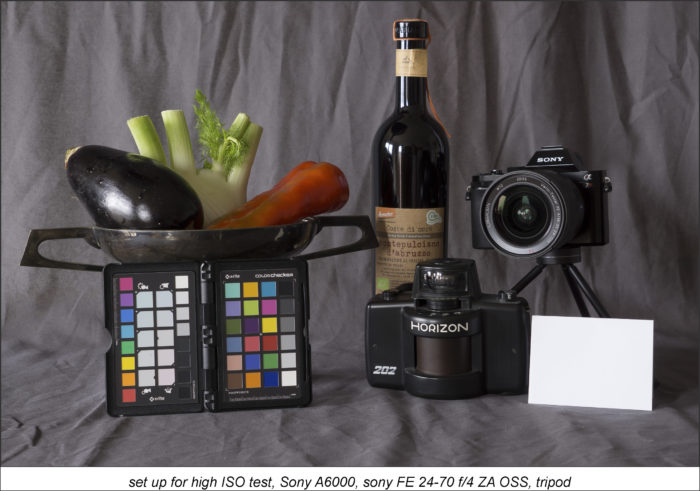 again a 1:1 crops comparing the result on the left and one of the original images on the right 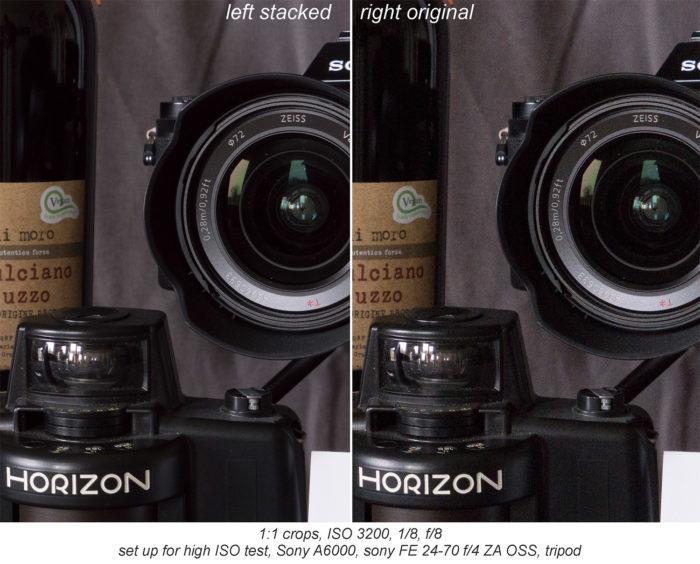 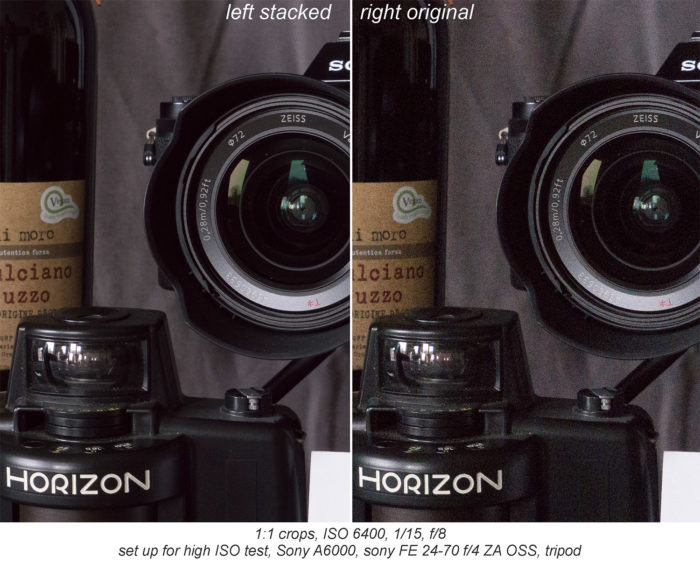 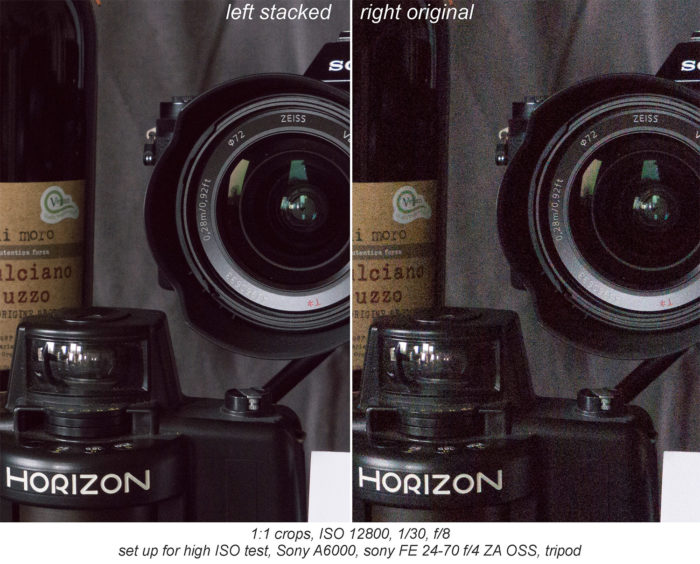 I did the same test with ISO 100 and wanted to know, if even at base ISO this improves the noise in the shadows. The results did not show any significant differences and are useless to show here in web size. 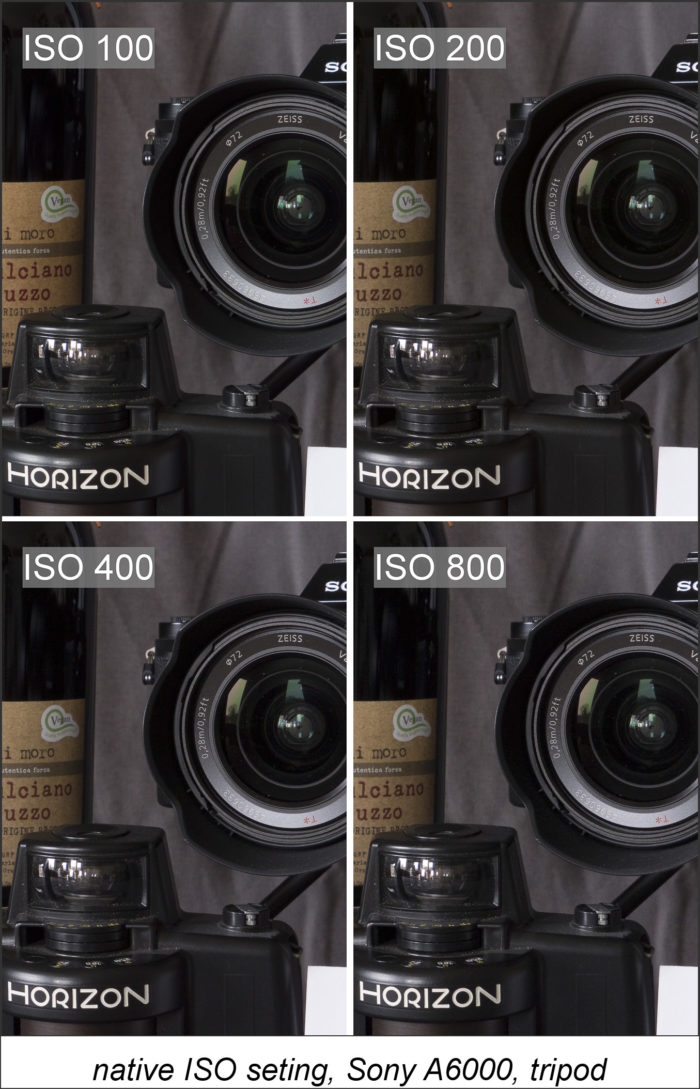 The high ISO have never been of any interest for me, but as a final and extreme test here is ISO 64.000 hand held from 12 shots made with the A7RII and the Zeiss Otus 85mm/1.4@ f/7.1
No processing of the images before the stacking, only the standard LR settings.
I tried some chroma noise reduction in LR prior to the stacking, but the result was softer and the noise was about the same. 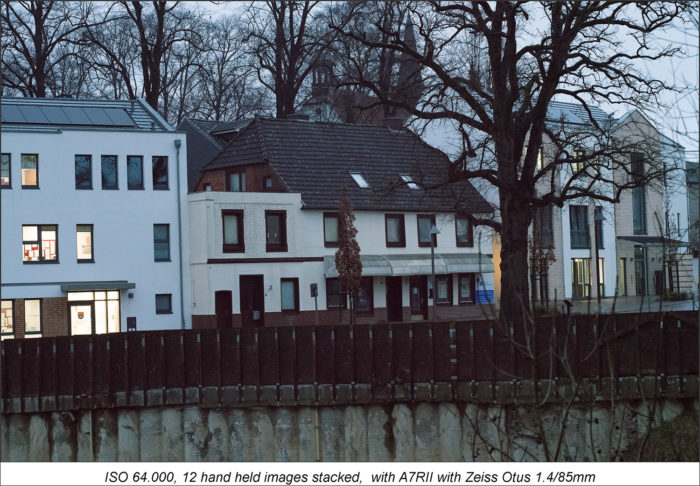 again a 1:1 crop comparing the result on the left and one of the original images on the right 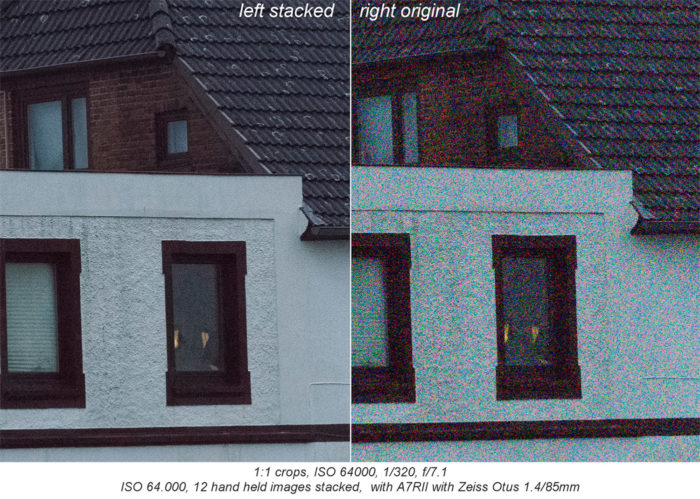 Hand-held Twilight:
Sony support writes: Shoots night scenes with less noise and blur without using a tripod. A burst of shots are taken, and image processing is applied to reduce subject blur, camera-shake, and noise.

I never use the SCN functions of the camera, but these two functions do about the same as described above.
BUT a big but: no control over the ISO, shutter speed and aperture, you get only JPG Fine and I counted about 4 shots for both functions :-(
Olympus has a similar SCN setting and uses 8 shots, but also only JPG.

Playmemories  –  Smooth Reflections App
ISO 64.000   6 and 16 exposures
sorry for the different colors, I had the idea one day later during daylight 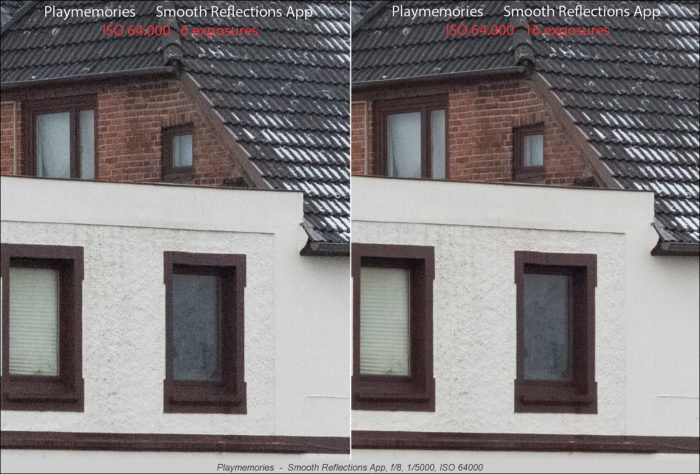 Want to know more about noise reduction in astro photography?
I found this:
The Ultimate Comparison of Nine Noise Reduction Methods for Night Photography
https://fstoppers.com/originals/ultimate-comparison-nine-noise-reduction-methods-night-photography-122259

convinced too?
go and try it and be surprised :-)
Good luck and low light