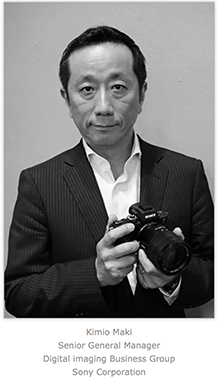 Imaging Resource interviewed Sony engineer and manager Kimio Maki. The main talk was the new 42MP sensor and here are some key answers:

2) Noise improvement: in terms of ISO, this sensor’s sensitivity is better than 36-megapixel chips. The A7R Mark II has better noise performance; better than the A7R.

3) Why not 50MP: But 42 (MP) is not a good word. But actually, the engineers said “if you prefer 50, you have to lose sensitivity”. Of course 50 [would] give better resolution, and 45 would be more impressive, but it wouldn’t be perfectly balanced.

4) Advantages of backside illuminated sensors: in order to realize this kind of sensitivity, we have to prefer backside-illuminated. That’s the first priority, to gather lots of light, more light, effectively. The other decision was in the wiring layers; we used to use the aluminum, but aluminum is not good enough to transfer the data faster. Therefore we change the material from the aluminum to the copper to make it faster. [Ed. Note: Copper is more conductive than aluminum, so there’s less resistance in the circuit lines on the chip, meaning signals can propagate faster.] Therefore, then we could get a faster transition from the light to an electrical signal.

5) Uncompressed RAW: Sony RAW is compressed, not uncompressed. But if we’re getting a lot of requests for it, we should make such a kind of no-compression raw. We recognize the customer’s requirement, and actually we are working on it. And yes Sony could provide that via simple firmware upgrade!

6) Hybrid Autofocus: in terms of autofocus, we are using a hybrid focus, so first we use the phase-detection focus to get close to the object. Then near the object, we start to use contrast AF to get a clear peak. Then we adjust the focus. Then in order to make very precise focus (because 42-megapixel means very very small pixels), and also the focusing point could be a very small one, therefore we phase-detection together with contrast AF, contrast focus.

Recap: Hurray! Sony will give us uncompressed RAW at last! And let’s make no bargain here Sony, we want that addition on all current cameras :)

They showed me as an example an A7R II with a Canon EF 24-70mm attached via a Metabones “smart” adapter. Even though we were in a pretty dimly-lit conference room, the A7R II seemed extremely responsive, with very little delay between me half-pressing the shutter button and the beep of focus-confirmation. Sony’s Mark Weir noted that this was the first time a full-frame mirrorless camera could focus traditional SLR lenses as fast as SLRs could. He noted that in this mode, the A7R Mark II was using only phase-detect AF, vs the two-stage hybrid approach Maki-san mentioned earlier.