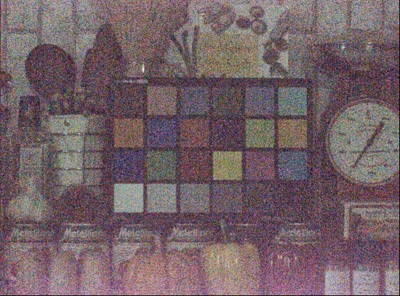 An image taken with a new sensor in an “almost” complete dark room!

This is not an Alpha camera news but it shows how advanced Sony sensor technology is. Sony announced the new IMX224MQV 1/3-inch 1.27MP CMOS sensor for automotive cameras. Like you know Car aided driving (and full automated driving) is a big business and that Sony sensor is the very first(!) sensor that fulfills the AEC-Q100 reliability tests. It means it can help to drive a car in a moonless night!!!

It’s the world’s highest sensitivity levels of any image sensor of its kind. The new sensor is capable of capturing high-resolution color images in light conditions as low as 0.005 lux, a level equivalent to that of a moonless night and one that is far below illumination levels under a star-filled night sky. The is set to become Sony’s first image sensor for automotive cameras to meet the requirements of the AEC-Q100 reliability tests. The sensor sampling starts on Nov. 2014, mass production is planned for Dec. 2015.
The IMX224MQV sensor has 2,350mV (standard F5.6) sensitivity, a level of sensitivity that is around twice that of older Sony IMX238LQJ sensor with 3.75um pixels and the industry’s highest. This was achieved through the adoption of photo diodes that improve the conversion efficiency of light into electrons and through the addition of circuits that improve the conversion efficiency of those electrons into voltage. Also, a PGA with a gain up to 72 dB further contributes to the ultimate achievement of a minimum object illuminance of 0.005 lux. With this design, it now becomes possible to capture high-resolution color images even on a dark road at night with no stars to illuminate the surroundings.
This image sensor also supports a WDR that allows for extended exposure time, which, when compared to conventional multi-exposure WDR systems, makes possible improved image quality in low light conditions when combined with a compatible ISP (Mass production of compatible ISP from Sony is planned on June 2016). Furthermore, the sensor’s pixel has an improved NIR sensitivity for better object recognition when used in with NIR LED illumination.