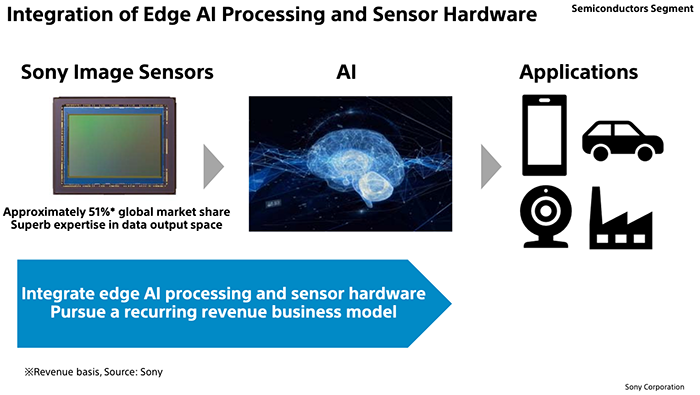 Sony also released a detailed overview of the semiconductor business (PDF file here). Over 80% of the sensors is produced for the mobile and automotive business. “Classic” Imaging business plays a small role here. But the good news for us is that the mobile/autotomitive business is a BI driver of innovation that could be implemented on Sony Alpha Cameras too.

One major goal for Sony is to integrate AI processing directly intom the sensor hardware. It’s not clear yet what benefits it will bring to us Alpha users. My guess is that object recognition and autofocus trackin can improve with that approach. Maybe the Sony A9II will be the first camera using those kind of new “AI sensors”???

This is what Sony had to say about their semiconductor business:

@waltervandusen sent me this coll picture and text:⁠ ⁠ Happy Thursday. I had the use of the new Alpha 1 yesterday for a portrait session. The Sony person just received it the same day and two hours later I have captured portraits with it in JPEG and RAW. During the outfit change, I captured a still life of an 8x10 view camera along with the Alpha 1. I thought to myself "Passing the Torch" when I saw the image today. I used my A7RIV for the image.⁠ ⁠ Alpha 1 in mechanical shutter only made a slight noise and extremely fast eye track focusing. It was cool going directly from the Alpha 1 to the A7RIV for the noticeable difference in performance.⁠ ⁠ I give you permission to share the attached image if you like and of course it would be my honor if you do.⁠ ⁠ Take care,Walter van Dusen⁠ ⁠ -⁠ ⁠ #mirrorlesscamera #mirrorlessgeeks #cameragear #camerageek #mirrorlessgeeks #camerasetup #camera⁠ #sonyimages #sonyalphasclub #sonyalpha #sonyphotography #sonyphotogallery #sonyalpharumors #sonyalphagear #SonyPhotoGallery #SonyAlphasClub #SonyMirrorless #sonyalphaphotos #sony #sonyalphauniverse #sonyalphaclub ⁠ ⁠ ...