Sony reconsidered published those two graphs that highlight the negative impact of the COVID-19 outbreak. He writes:

I could see a scenario where Alpha sales collapse by more than 50% to 1.2 million for FY20.

The only saving grace for Sony will be if the world is back to some semblance of normalcy by fall and that consumer appetite and spending roars back during Q3 FY20, the ever-important holiday season. Even then, will global or local travel have recovered to a meaningful degree? What if there is the feared second wave of COVID-19? For that very same reason, Sony and other companies are holding back future projections for Q1 though I could see that expending till 2021.

I should also point out, it’s the optimist in me that’s predicting 1.2 million sales. I can envision a scenario in which Sony ships 800K cameras total in FY20. If that were to happen, it would trigger a significant roadmap shift within Sony (and other camera makers) as they face a market that went from have a light appetite for cameras to nearly none. Suddenly, Sony wouldn’t need five different cameras not because there aren’t meaningful differences between the lines, but because the costs to maintain them wouldn’t justify the market. 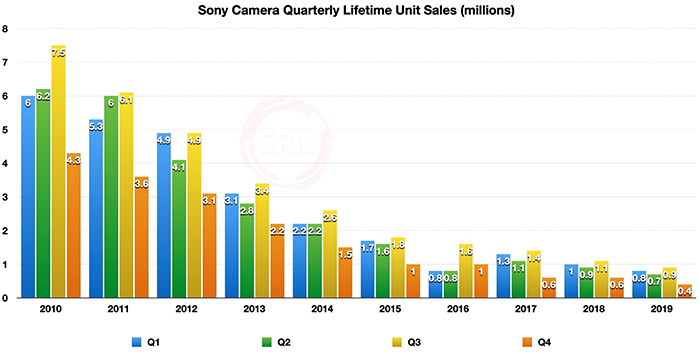