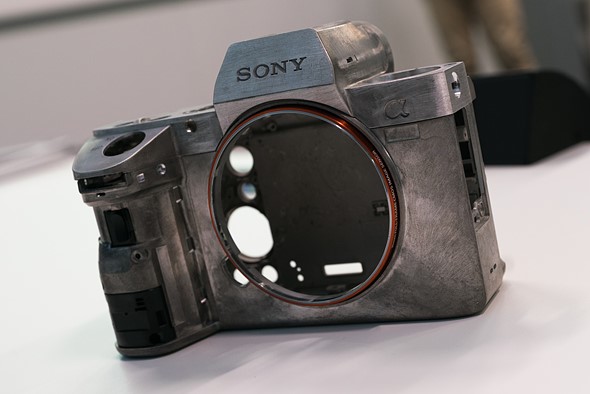 A9 body picture posted by Dpreview

Dpreview posted a long report about their visit at Sony Tokyo. I invite you to read the full article. I will just highlight a few interesting talking points:

About the Sony A9:

At Sony, a new camera like the a9 takes two to three years to develop, we were told.
Yasufumi Machitani, project leader on the a9, talked to us about the development of the camera. A number of its features, like blackout-free shooting and fast AF/AE calculation, require sensor readout speeds conventionally thought impossible. A stacked BSI-CMOS sensor with integral memory was necessary for these technologies, and the camera division’s awareness of such coming sensor technology years in advance allowed it to plan the a9.

Sony believes there is a growing market of pros and enthusiasts, with shrinking demand at the entry level (it’s hard to argue with that, given the death of the compacts and the rise of the smartphone). This brings a higher demand for better performing products, be it in terms of autofocus, speed, resolution or sensitivity. Therefore, Sony says its product strategy is to pack as much available technology into each product as possible, barring hardware limitations, to meet a certain price point.

Sony’s unique advantage over the competition:

he communication between its image sensor development engineers at Sony Semiconductor and the camera teams at Sony DI give the company a unique advantage: an understanding of important sensor technologies to come two, five, or ten years down the line. The two-way communication between a cutting-edge sensor foundry and camera engineers that need sensor technologies to solve photographic problems is a unique advantage for Sony’s camera division.

Why Mirrorless is growing faster than DSLR:

Since much of the capability of mirrorless cameras is derived from the image sensor itself, its development speed is much faster than DSLR. So while mirrorless camera technology is a relative newcomer to the field, Sony’s insight into semiconductor advances puts its camera division in a unique position to innovate and iterate quickly, bringing greater speed and functionality to consumer products across shorter refresh cycles.

Tanaka-san assured us that ‘the A-mount customer base is small, but loyal, and we need to serve them.’ While Sony does not intend A-mount users to transition to E-mount, it does see the a9 as a potential body for A-mount lenses, via adaption. To that end Sony assures us the disadvantages associated with adapters – like the lack of proper subject tracking – are addressable, though it won’t officially support or offer a solution for Canon lenses natively.

Expressing very frank surprise at the idea that some of our readers feel Sony is less committed to APS-C, Sony DI executives assured us that, on the contrary, they are fully committed to APS-C. They pointed in particular to its potential to increase business by its adoption as a second camera for pros (a6300/6500) or a first-time camera for casual users (a5100/6000).

We asked Sony about the omission of S-Log2 and PlayMemories on the a9. We suggested it ostensibly appeared like forced product segmentation, uncharacteristic of Sony’s product strategy. While it still appears that may indeed have been the case, we were assured that Sony takes our negative feedback about these omissions seriously.