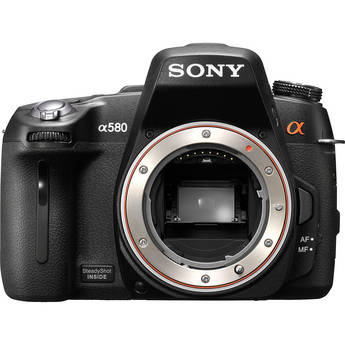 [/shoplink]The image on top shows the last Sony camera with optical viewfinder. The [shoplink 5509 ebay]Sony A580 (Click here to see the cam[/shoplink]).

I finally recovered from my long trip on the dolomites. It has been an amazing experience but I don’t want to talk with you about that :)
Last week you saw the very first picture of the A77 and A65 production models. But there is also a rumor that is “work in progress”, something I am not sure yet but I want to share here anyway (with an SR3 value -> see rumor classification at the bottom of the post). A week ago a known source told me that Sony may changed the decision to release translucent cameras only. He said there could be an optical viewfinder DSRL announced along the A77 and A65. And yesterday another source told me that there should be a third Alpha camera announced along the A77 and A65.
Now, I don’t know if there is a correlation between the two rumors, please if you are an optical viewfinder fan don’t be to excited yet. Is till do believe there will be no new OVF camera. But I do hope that after reading this post my trusted sources will tell me more about that mysterious third Alpha camera.
Anyway, I know that most of our readers are still hoping that Sony will continue to release OVF cameras. But I do believe EVF are the future and solution like the hybrid viewfinder on the [shoplink 6075 ebay]Fuji X100 (Click here to see that cam)[/shoplink] are not the future. All depends from the EVF quality which has to be improved (current EVF quality is insufficient). And I think also Canon and Nikon will go this route sooner or later!