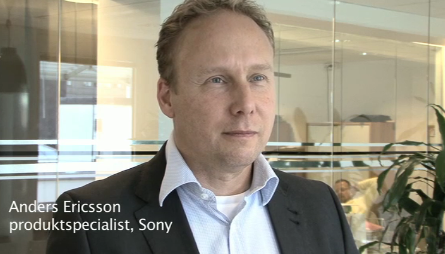 Markus from Sweden sent us the following link (Fotoguiden.se) to an interview with the product responsible guy from Sony Sweden. The interview is in swedish and Anders Ericsson (Sony) says that the Sony A560) and the A580 are probably (pretty certain) the last traditional DSLRs from Sony! So bye bye Optical Viewfinder :(

Can our swedish readers please make a complete translation? Thanks!

UPDATE: I repeat, we don’t expect the A7xx yo be announced at Photokina. Probaby they will sow the prototype only. But we do believe the A560 and A580 are really the last DSLR cameras…

UPDATE: Here the complete Interview translation made by Eric (Thanks!)

Q: Anders Ericsson, photo specialist at Sony, you have just released four new DSLR. Isn’t that a little too much?
A: Yes, you could really think that. The thing is that we are entering a new market where haven’t been precent. Early this spring we released a NEX camera which combines the quality of the DSLR and also high resolution video in the NEX-5.  We are now entering the DSLR bodies and so are releasing two different types of concepts here.

Q: These new cameras, the A33 and A55, which are a completely new design from Sony with fixed mirrors, which types of customers are they targeted at? Who are you competing with?
A: Well they are for those customers who are thinking along the lines of “Should I buy a very good compact camera with video function or should I aim a little higher?” Maybe they are looking a little at, for instance, the Canon EOS-550.

Q: It sounds like this technology could be interesting for instance for hobby photographers/semi professionals with a 70-200/f2.8 who want’s to shoot sports.  It is possible we could se this technology in cameras with optical viewfinders which are a little bigger and more professional?
A.: Yes, absolutely. This is a new direction we are taking and going from a DSLR, that is a digital system camera, to SLT where the T denotes Translucent, meaning a new type of mirror technology. This broadens the concept type to many different types of camera bodies. So that is true.

Q: Then the A560 and A580 might be the last models of your older, traditional segment?
A: I can agree to that, yes. That is correct.

Q: Is it the graphics card in the camera that can’t handle the whole picture and that is why the whole area isn’t used, or what is the technical cause for this?
A: That’s a very good question. It is possible that i could be that they have used up the capacity of the camera on the software for the autofocus, in order for that to reach top performance.
(That’s what I think he means to say anyway, he’s not expressing himself very clearly.)

Q: A33 and A55 have a fixed mirrors which “steals” some light. How large is this loss of light?
A: They are talking about approximately half a stop before it reaches the software, but the new sensor in this camera should mean that it has less of a loss than the older A550.

Q: So you are gaining half a stop on the new sensor, doesn’t that mean you’re always facing the risk that you are half a stop behind the competition – comparing the latest sensors?
A: We are hoping that the reviews that you and the rest of the press are producing, will show that these cameras perform better than the older A550 did.

Q: Sony has previously gotten some critique regarding noise on some models but we saw earlier with the A550 and A500 that you have improved this some. Do you think with time you will become the leader in terms of noise?
A: The goal is to deliver very good imaging chips and have a very low noise levels in those. What happened in the A500/A550 was that we switched from the older CCD technology in the entry level cameras to the new exmor technology where we digitize the light directly on the imaging chip, which means that we loose the step where you would previously build up noise because of the external A/D converter. We can now skip that step.

Q: Those who have an A700 and are hoping for a new camera for the more advances users, when will they get something new?
A: That is a very good question. There have been a lot for whispering about an A750 during that past six months. We have not seen any press release of information regarding this internally yet. We’ll see what happens at the fair in September, down in Germany.

Q: Finally, the electronic viewfinder you are using in the A33 and A55, in the press meeting here there was some talk about something even better coming in a year. What kind of technology is that?
A: You are actually getting ahead of me here, I have no facts about that development. What I have heard rumors about is that there is a lot of development going on in that area. What you have now with the viewfinder in the A55 is that you have very little loss of light when photographing in low light, which is a tremendous advantage compared to earlier compact cameras when using an electronic viewfinder.