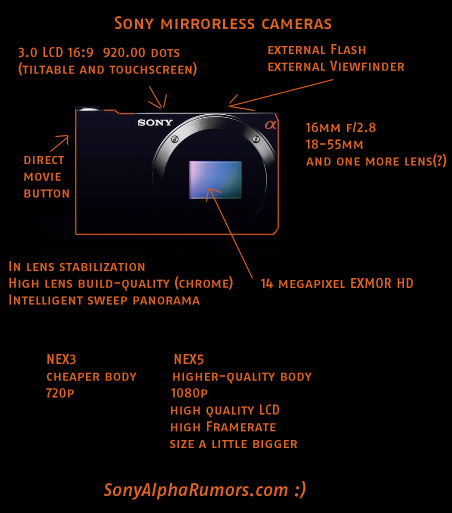 UPDATE: One of our best sources gave us some important “corrections”. He said that “the two cameras are the same size and it is only chrome color finish, no chrome”

I made a small summary of alle the recent Sony mirrorless rumored specifications. All I am writing here doesn’t come from Sony, this are just “rumors” we collected and received from you. I expect most of the informations to be true but small changes can still be possible.
Thanks!

General impression:
Since weeks we are receiving pieces and pieces of informations about the Sony NEX cameras. According to informations we collected most of the dealers and photographers who have seen the cameras have been very positive impressed by the cameras.
Sony will present the NEX3 and the NEX5.
The first thing people noticed is that the camera is incredible thin! Someone told me that it is thin like his index finger. The NEX3 and NEX5 are more compact than every digital Olympus PEN

The cameras:
The NEX3 has a plastic body and the NEX5 has a metal+plastic body. The NEX3 records 720p and the NEX5 1080p. Both do have the same 14 Megapixel EXmor sensor.
The NEX cameras do not have built-in image stabilization and no built-in flash. They have a hotshoe and an external flash (included into the kit-box).
The LCD display is tiltable. It is even better than the screen from the Sony A550

LCD.
All cameras do have “intelligent sweep panorama”

The lenses:
There will be two kit zooms and one pancake. Compared to MicroFourThirds lenses they are a little big bigger. Even the 16mm f/2.8 pancake is bigger than the Olympus 17mm f/2.8 Lens

lens. But the Olympus lens is made by cheap plastic. Sony lenses are very well built (Chrome).

Important notes:
– This are rumors (sent by anonymous sources or found on worldwide forums) and not official Sony news.
– We also try to double check the rumors we recieve. So if you send us some infos do not expect them to be published quickly.
– Feel free to share your rumors and news by sending us an email on sonyalpharumors@gmail.com