Update: you can own this modified camera by taking part in a black and white photography challenge. Read all details here. Good luck!

Wouldn’t it be great if you could shot RAW and get wonderful looking black and white pics just by desaturating and with almost no post-processing work? Photographer Ming Thein did an amazing hacking project on a [shoplink 3003]Sony NEX 5 (price & specs)[/shoplink]. Before we get into details it is best to read Ming Thein’s motivation for the modification of the NEX-5:

I’ve been paying a lot of attention to black and white tonality both in the past, and of late in conjunction with my serious re-exploration of film; there’s something about the way film responds that gives it wonderful quarter and three-quarter tones. The look is achievable in digital, but it requires a lot of post processing simply because sensors do not natively respond to light in that fashion.

From a more technical point of view, the issue is that digital sensors are optimized to accurately reproduce the colors of the visible spectrum. That’s perfectly fine if you want to take color shots: you want a reliable reproduction of colors. Things, on the other hand, change with B&W photography. Not only it is, as Ming Thein states, a widely subjective aesthetic matter. Moreover, often, if not always, the artistic outcome lies within the tones. Hence, the matter is how to get a film like tone rendering without having to do heavy and time consuming post processing on the computer. A possible way to obtain such a result is to remove all filters from the sensor. Let’s go back to Ming Thein (emphasis partly mine):

Infrared, and to a lesser extent, ultraviolet, photography have been done for some time. There are companies out there which offer (not cheap!) conversions to either or both; there are even companies which offer services removing the anti-aliasing filter – though oddly, not both. But to create what I envisioned as the ultimate black and white camera*, all of this would have to go: no UV or IR filters, no AA filter. Just bare naked sensor. After several days of monkeying around with dozens of tiny ribbon connectors, and breaking one (caveat: the camera of course still works, but that connector will never be able to be opened/ released again) and nerve-wracking moments with various sharp implements, I’m pleased to report that this particular Sony NEX-5 has no filtration at all in front of the sensor, except for the Bayer filter, which is part of the sensor itself and thus cannot be removed. It’s about as close as you’re going to get to bare silicon […].

This is obviously more than a weekend’s DIY task. Ming Thein spent a lot of time to do the hack, and not everything worked at first glance. Opening such a tiny and densely packed camera isn’t for the faint of heart. But results are spectacular (don’t miss the awesome samples). Back to Ming Thein:

I’m going to be blunt here: the camera doesn’t hit full marks across the board. From a tonal viewpoint, the results are fantastic – just shoot raw and desaturate, and that’s all you have to do for almost every situation. All of the images in this post have had almost no work done on them at all – just desaturate. They came out of the camera 99% there, with this wonderfully filmic quality – even at high ISO. Is the more dynamic range? Not really. Skin tones are smooth yet delicately textured; deep shadows have that glow thanks to IR reflectance; and the detail is definitely better than a standard camera

There are also some drawbacks. Resolution isn’t at best, not because of the sensor but because of the lens (he used the 18-55mm kit lens). The lens resolves good in the center of the frame but isn’t apochromatic enough in the borders to be able to cope with the IR and UV rays reflected by the subject and caught by the sensor. An issue that is normally cut of by the filters that have been removed. The result is a sort of smearing in the corners. Quoting:

The smearing is caused by UV and IR spectrum image forming rays from the subject – cut out by the filter pack, normally – being registered on the sensor at a different physical location to visible light. There is still more visible light, of course, which means that focus is mostly where autofocus puts it, but not for all subjects – warm subjects in low ambient light – people indoors, for instance – tend to be a little back-focused because of this. Outdoors, things are fine (visible light > IR again)

However, the results are amazing. Don’t miss this interesting post and the images shot with the modified NEX 5! 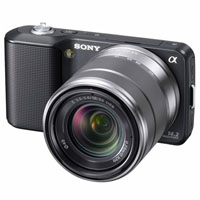 Digitalcamerareview published a detailled test of the new Amazon Österreich

/ BHphoto camera. They also find the image quality to be very good with the only major issue beeing the complicated NEX menu system

Also CNET Asia tested the NEX-5. But their review will be online in few days.

In the meanwhile PCworld posted a video preview of the camera: http://www.pcworld.com/article/195998/sonys_alpha_nex5_digital_camera_dslr_capability_without_dslr_complexity.html#

Probably they are testing a preproduction version of the Amazon Österreich

so autofocus speed could still improove. Looks like the Panasonic GF1

performs better. What do you think?

Imaging Resource has been incredible fast! They already reviewed the Sony NEX5 camera and compared it with MicroFourThirds

has a very good image quality (better than the Olympus E-P1 and the Panasonic G1) and is on par with beasts like the Canon 550D and the Nikon D5000.