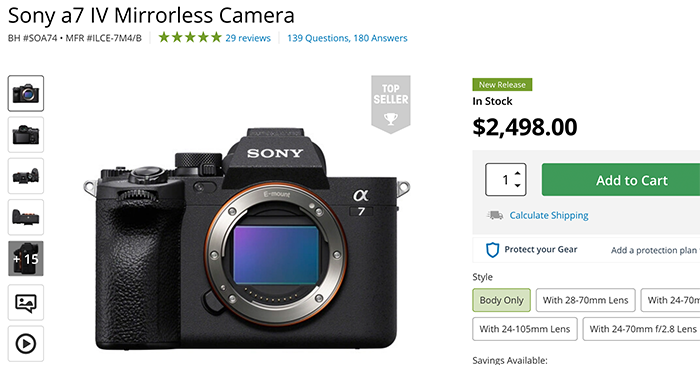 Peter sent me this message:

It is about the new a7 IV, that has a (by Sony to owners confirmed) wide aperture close distance Eye-AF front focus issue (like frame filling face, or head- and shoulder portraits), which makes the AF to focus on the eye brows or eye lashes only, but not to the pupil – even if the focus frame does mark the pupils perfectly.
The spot-AF with deactivated Eye-AF is not affected, so it seems to be a software issue.
Also many owners did a comparison with their a7 III, a7R III (I did), a7C and even the a7R IV and none of them did show this issue and nailed the pupil in the exact same conditions by mostly 99%, while the a7 IV did miss 50% on good days and typically miss 75-90% and the other 10% have mostly been only acceptable.
Many (including Sony) blamed affected users with user error, DOF and aperture comments. But the funny thing is, that also a pro photographer who was trying to make photos for an eye lashes extensions catalogue had this issue – with aperture F6.3! There have been some more affected pro photographers as well.

Sony denied this issue for a long time but we could make some pressure and still do, which seems to work.
We’ve built a community to share experiences, share serial and case numbers and proves that this is a serious problem, that every owner can point to when opening a case.
Most importantly: We already have 3 confirmations (2 received today, confirmed in Romania, Australia and Germany) from Sony and a reseller with an own Sony rep that could reproduce the issue together with the customer and different Sony lenses.
We’ve made them public and Sony told 2 of these owners that did get the confirmation as well, that there will be a communication on their website soon and a firmware update that will address this issue is on the way.

If you are interested, I can assist you with bringing all sources like the e-mails and also video links together.
Here you can see the Instagram account with proves for a quick overview: https://www.instagram.com/sonya7iveyeafissue/
And here is the Facebook group where we’re collecting all information’s including Sonys answers – it’s still growing: https://www.facebook.com/groups/sonya7m4eyeafissues/

Have a great day
Peter