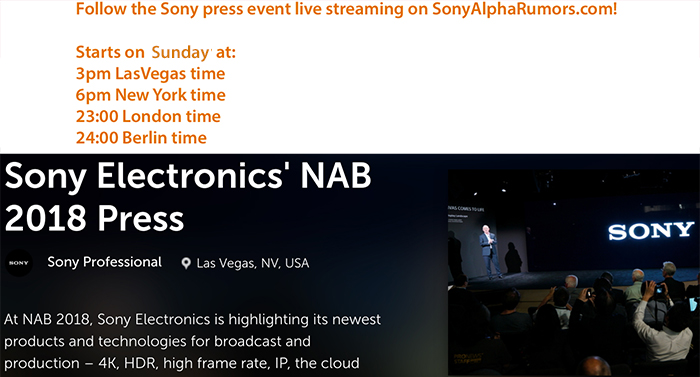 On Sunday at 3pm Las Vegas time (23:00 in London) Sony will have their NABshow products announcement. You can follow the video live stream here on SonyAlphaRumors.com.

That said, what can we hope to get?

30% chance: Sony A7sIII
NABshow would be the perfect place for the Sony A7sIII announcement but so far we did not get any reliable info that it will be announced on Sunday. All we know are some specs shared by trusted sources: New kind o sensor with integrated memory, 4k60fps, and same kind of A7III body improvements.

Lenses:
Top sources confirmed the 24mm f/1.4 GM lens will be announced soon. But this lens might be presented at one of the two upcoming shows (Worldphoto or Kando Trip) in April-May.