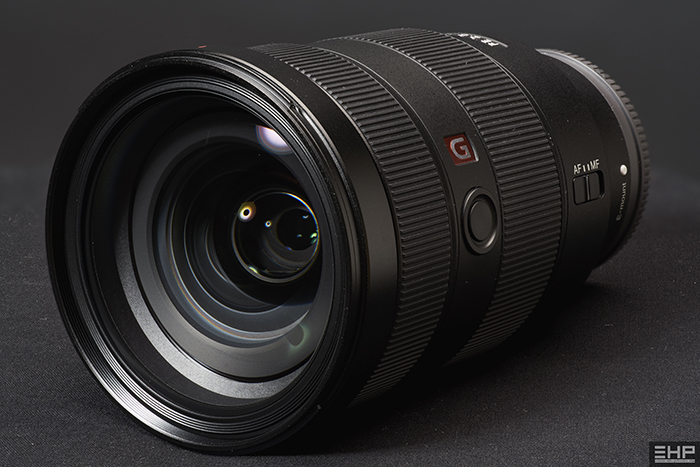 Introduction
Sony finally released the long awaited, brand new [shoplink 47915]Sony FE 24-70 GM F2.8 lens[/shoplink]. I placed my preorder in Februar this year, but the demand is so high, that I needed to wait until last week to get my lens. I spend the last days with this lens and collected a lot of sample images. In my full review I want to share my impressions and results with you.
I have tested the lens with my Sony A7RM2 and as usually I started to analyse and compare the lens in my little studio. As competitor I have used the
Sony Vario-Tessar® T* FE 24–70 mm F4 ZA OSS. 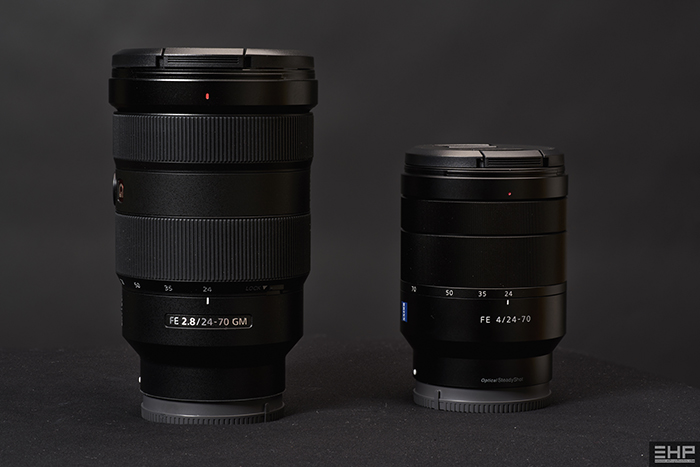 As it can be expected from such a high price tag lens the build quality is very well. The case is made of metal and feels good. The lens hood has a button to release the hood. I don’t like it much, because I hadn’t need it before and would not need this in future. But I have to learn to handle this. The lens is very heavy and bulky. The weight is 886g. In comparison the Sony FE24-70 F4 (426g) feels like a tiny toy. But before we complain about this, the
Nikon AF-S 24-70mm 1:2,8G ED is 900g and the Canon EF24-70 f/2.8L II USM is 805g. So the Sony is equal to the others.
The focus and focal length ring works very well with a nice resistance. Manual focusing works, but not far as good like on a Zeiss manual focus lens.
You get a focus lock button which is really great and a focal lenght lock button, which locks the focal lenght at 24mm.
You also get the new lens case like all new G-Master lenses have.

Autofocus
The autofocus is very fast and accurate and in contrast to the Sony FE 85 GM F1.4 (see my test HERE) nearly noiceless. I havn’t messured it but I’m sure it’s my fastest Sony lens I have ever had and I have had most of them. I don’t now how fast a adaptered Nikon or Canon lens works but I can’t imagine that they are faster. The focus nailes even in low light condition.
The Eye AF works also very well. You can nail the focus on moving people exactly in the eye.
In terms of autofocus you can use the lens for sports and event photography without hesitiation. 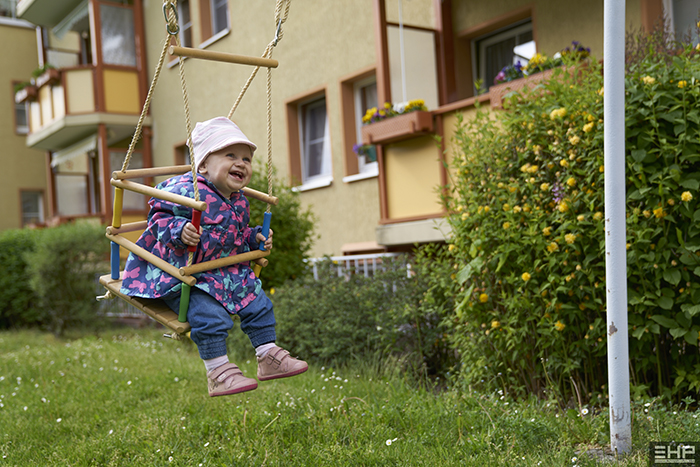 Sharpness
As usually I test new lenses on my testing wall. It is very helpful to find quality issues like with my Sony Distagon T* FE 35 mm F1,4 ZA (check out my test HERE). It also helps me to find strength and weak points of my lenses. I have tested three zones with 24mm and 70mm:
A – Center
B – Edge
C – Corner
To get a feeling for the results I compared this with the Sony Vario-Tessar® T* FE 24–70 mm F4 ZA OSS 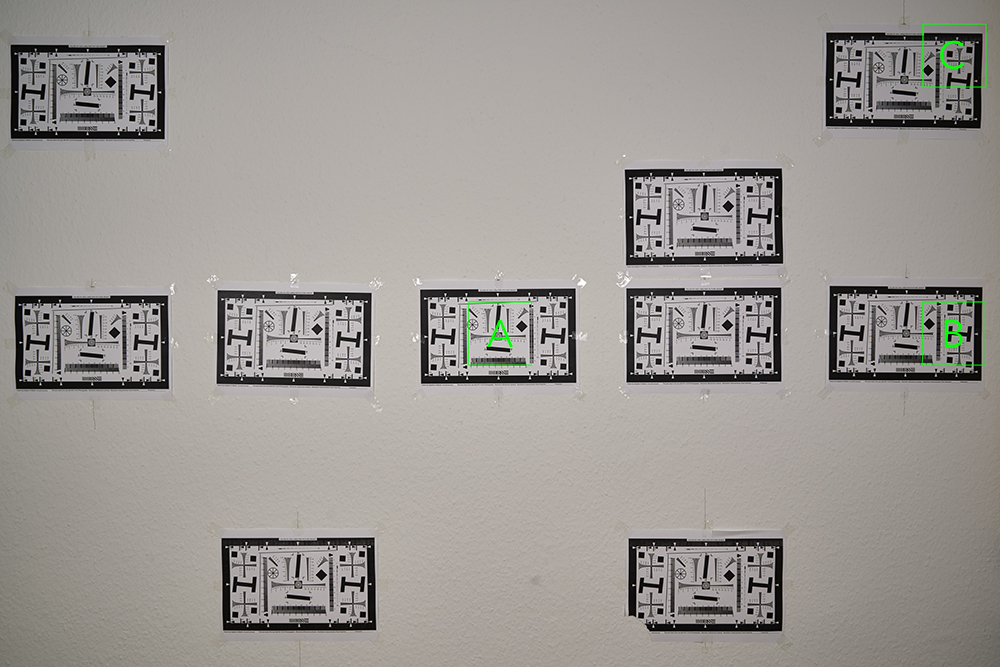 Zone A – the Center
The results are really great. The G-Master is sharp like a prime in the center at 24mm even wide open. The Sony-Zeiss is not as sharp as the GM and has less contrast but the results aren’t that bad. 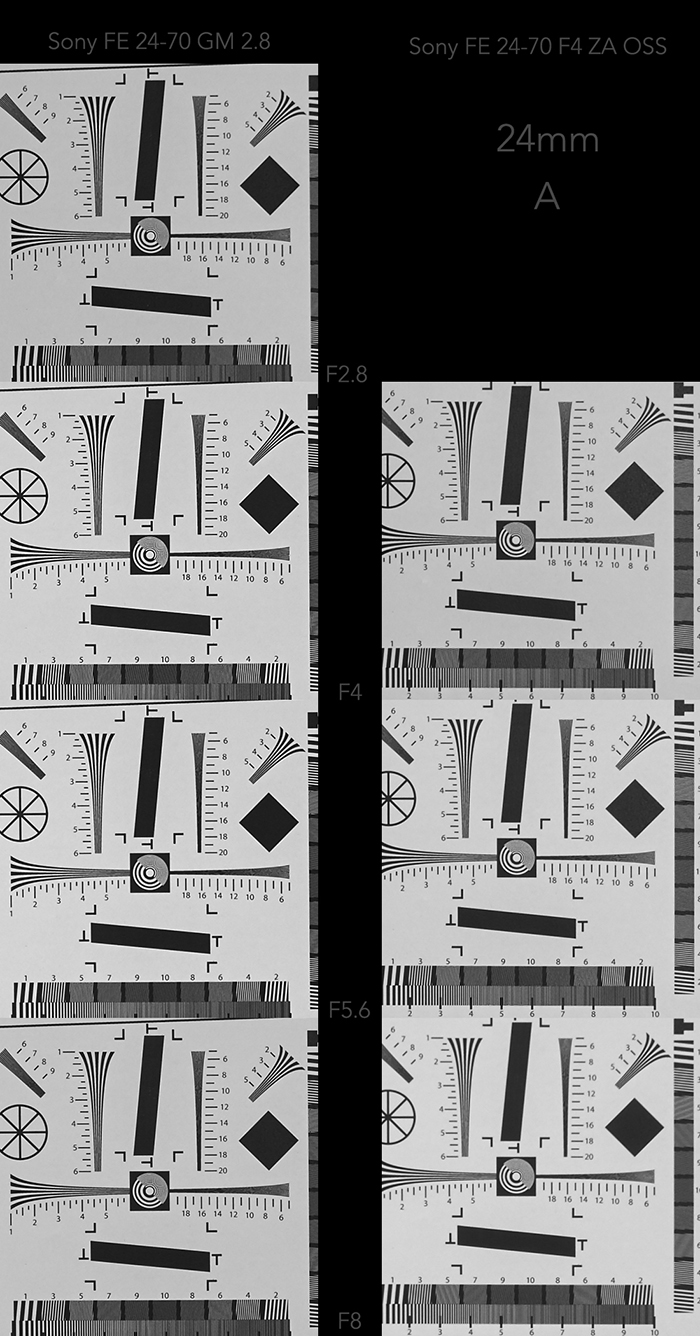 With 70mm the results are on the same level like with 24mm. The GM has also more contrast and it is sharper. At F2.8 the sharpness is a bit weaker than with 24mm at the same aperture. 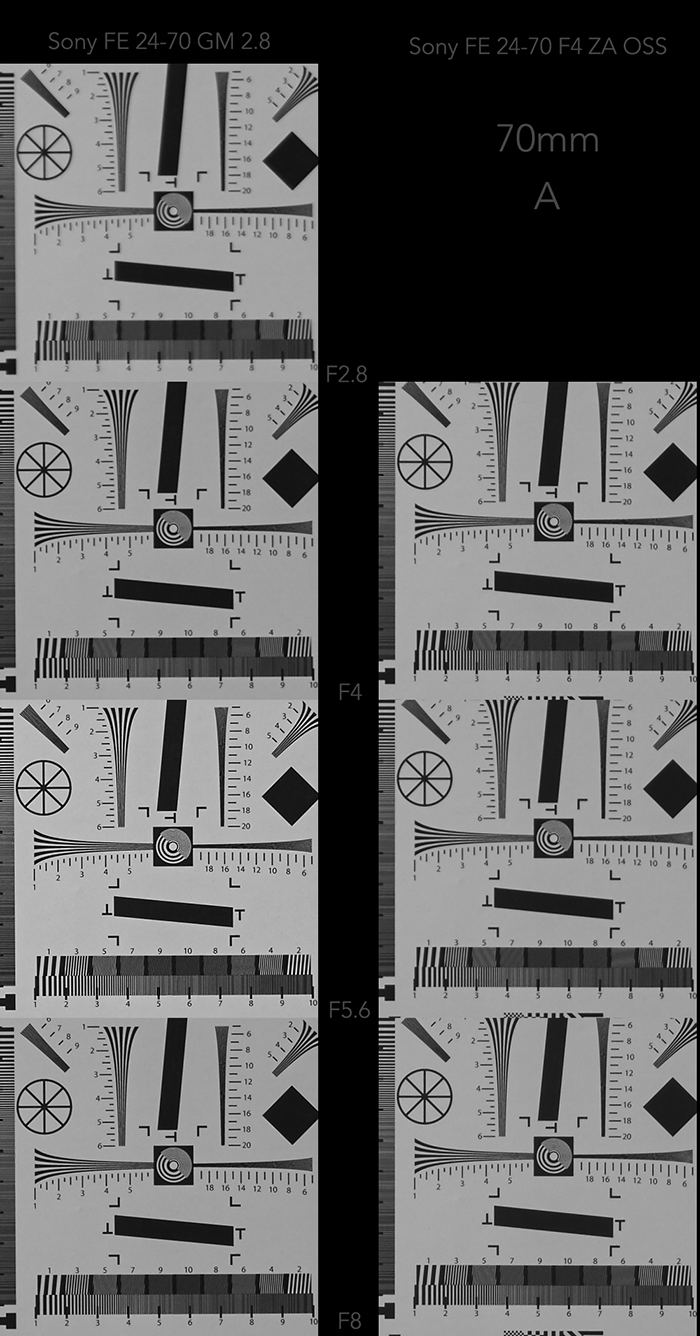 Zone B – the Edge
In the edge the results are on another level. The GM is sharp over the full F-Stop range an just a bit softer at F2.8. The Sony FE24-70 F4 is very weak even with F8 it doesn’t reach the sharpness of the GM @F2.8 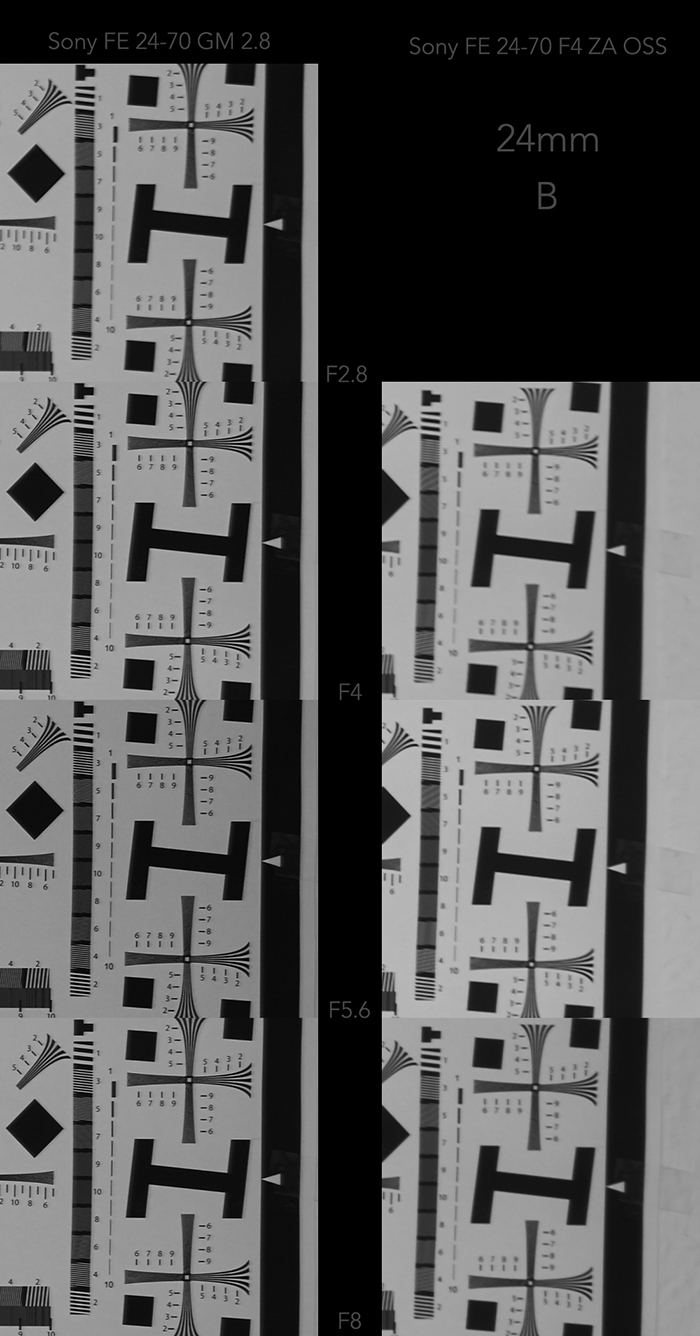 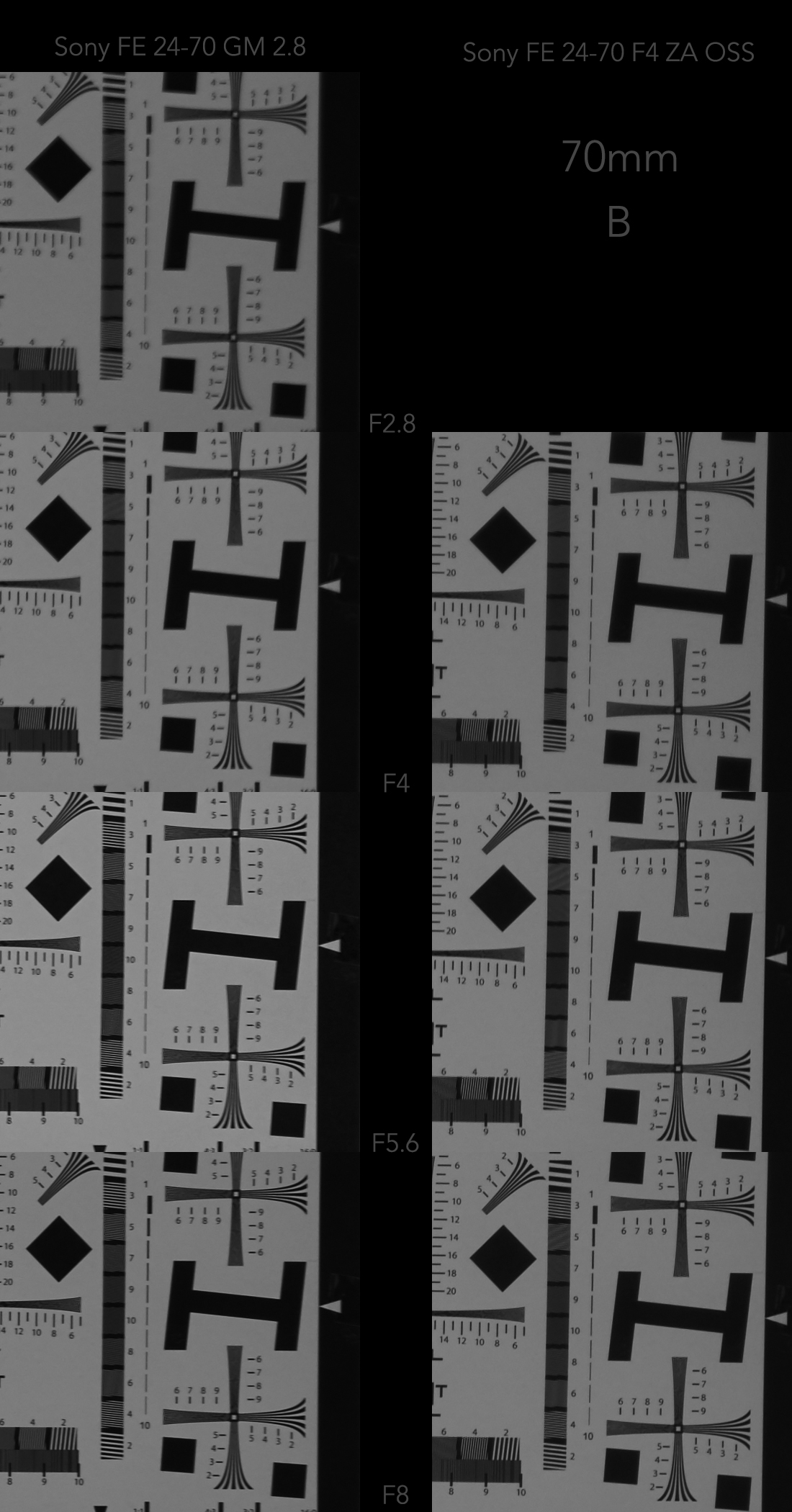 Zone C – the Corner
The last zone shows similar results like the edge. On GM side at 24mm it is better than with 70mm but really good. The Sony-Zeiss is weak at 24mm and at 70m better than I have expected it and equal to the GM. 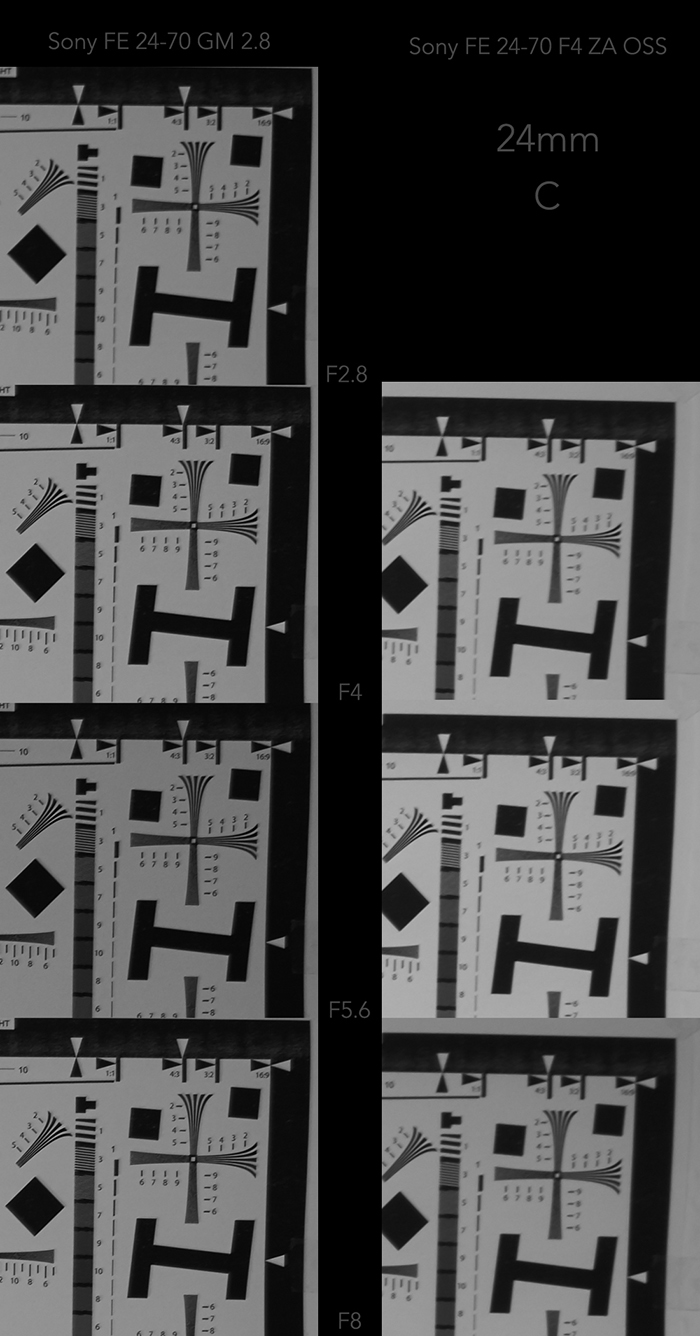 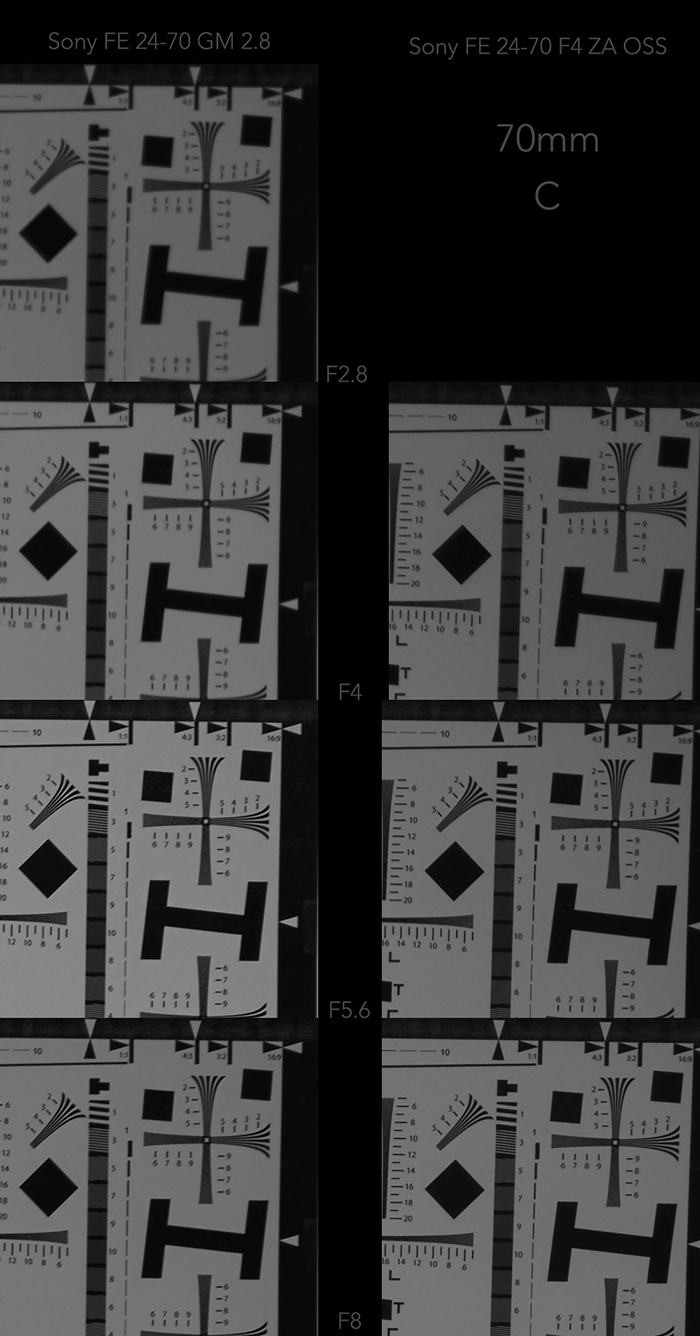 The sharpness results are all in all very impressive. But this I have expected. LensRentals.com tested also this lens and draw MTF charts of the lens. The results are very similar to mine.

Vignetting
The Vignetting of the lens is very moderate. You can see below, that there is a sightly vignetting at 24mm over the full F-Stop range. The vignetting at 70mm is less and almost gone at F5.6. With applyed correction profile in the camera you won’t see any vignetting in the final image. 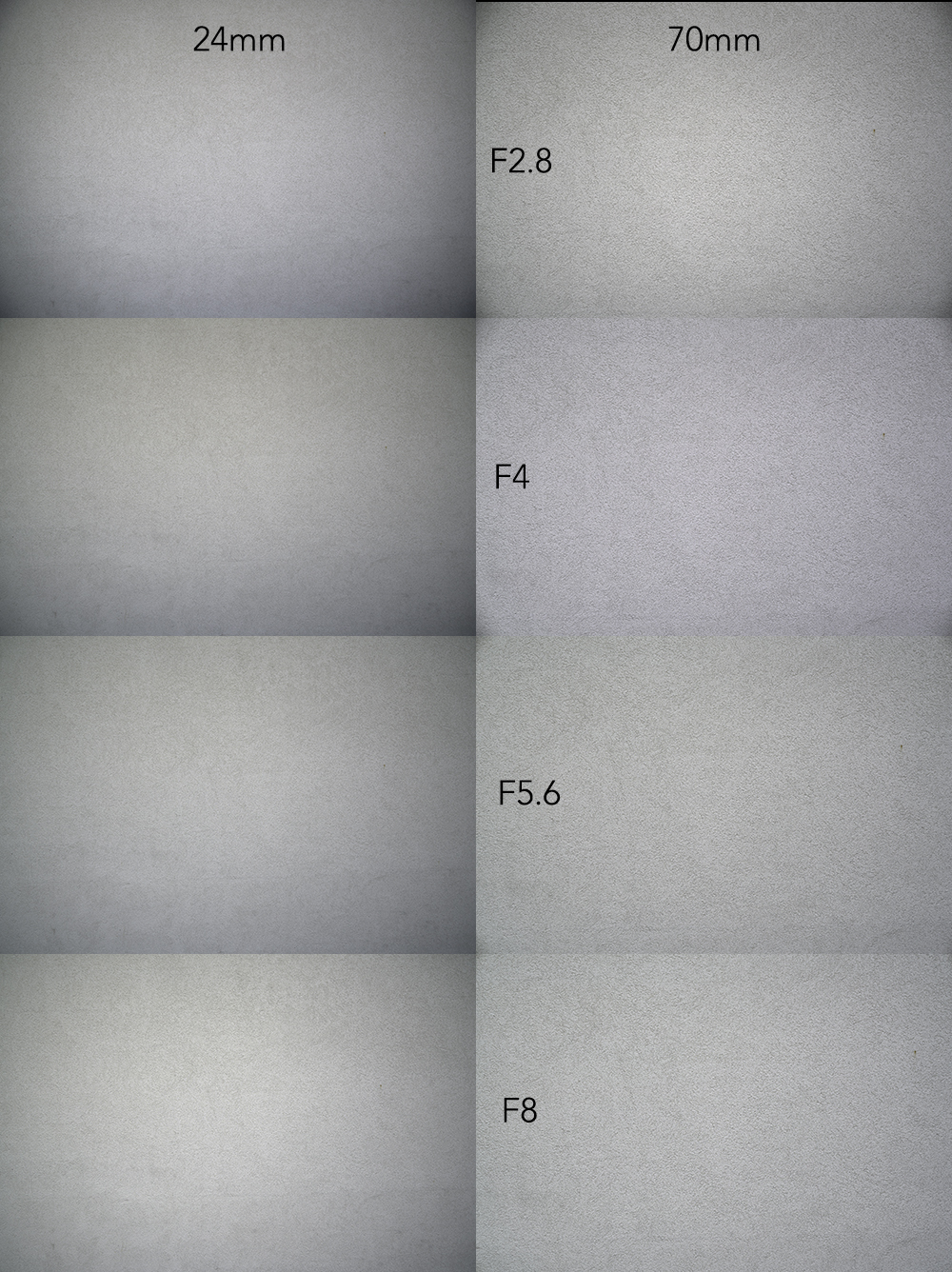 Distortion
There is a sightly barrel distortion visible at 24mm 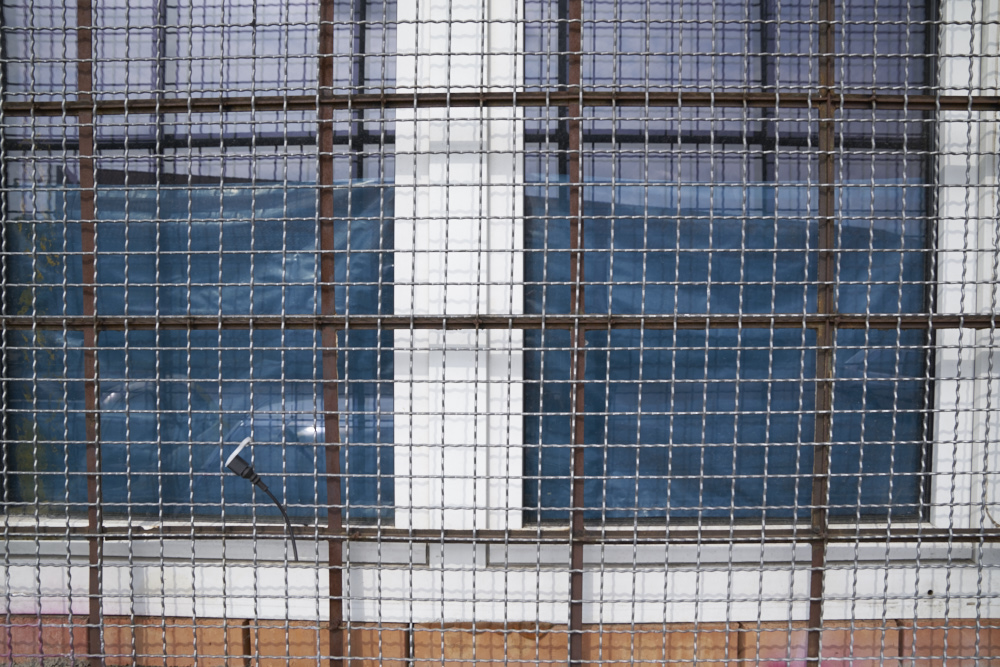 At 70mm you will get a minor pincushion distortion. 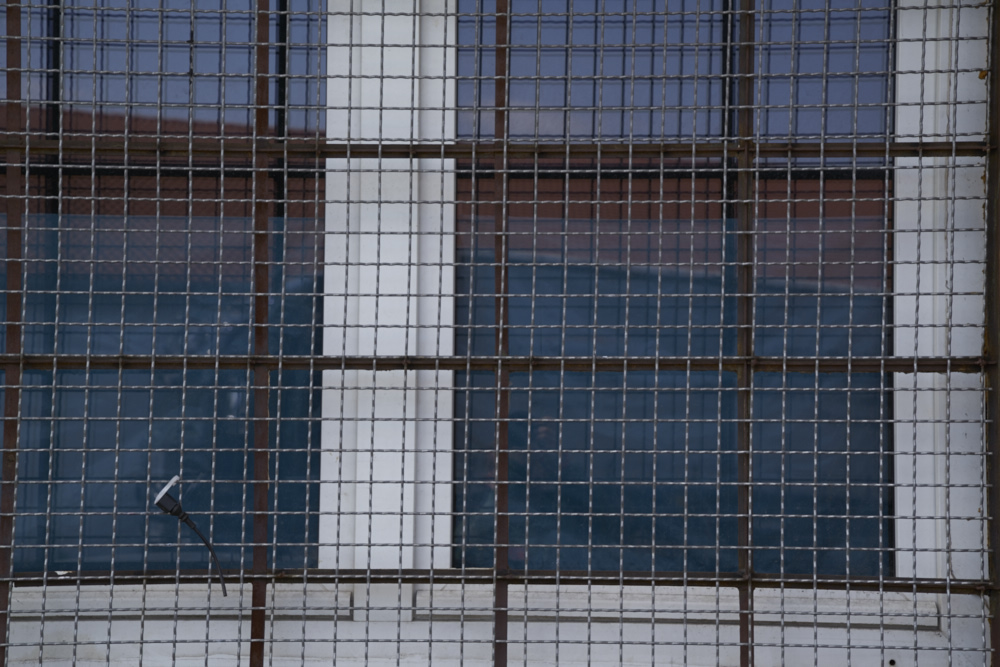 It’s almost the same like the vignetting. If you enable the camera inbuild correction profile which is also applyed to the RAW file you will get a clean Image without any distortion. 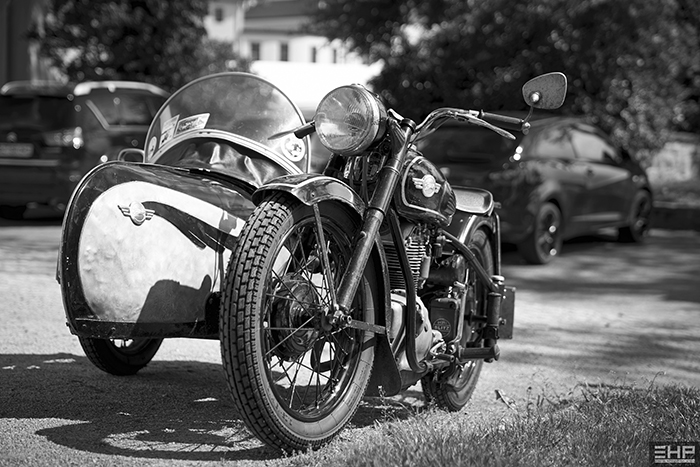 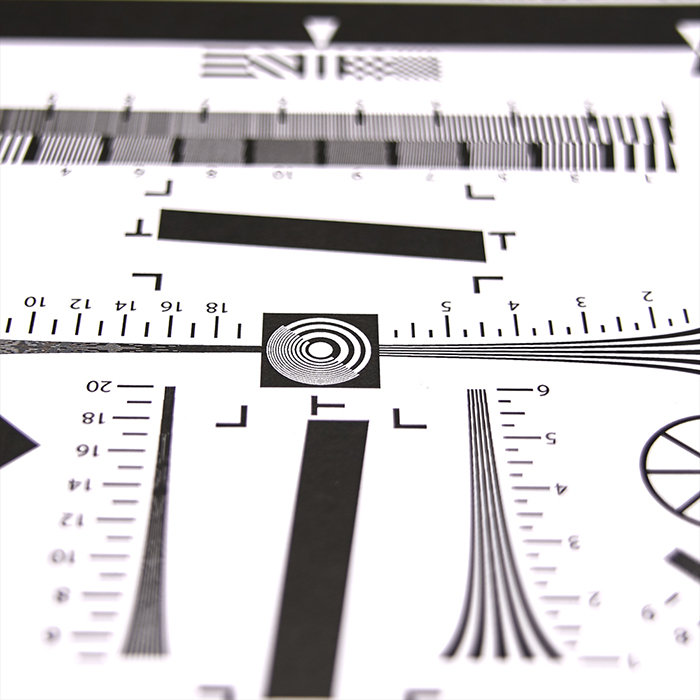 The same shot at 70mm you can see a noticeable amount of Longitudinal Chromatic Aberrations. 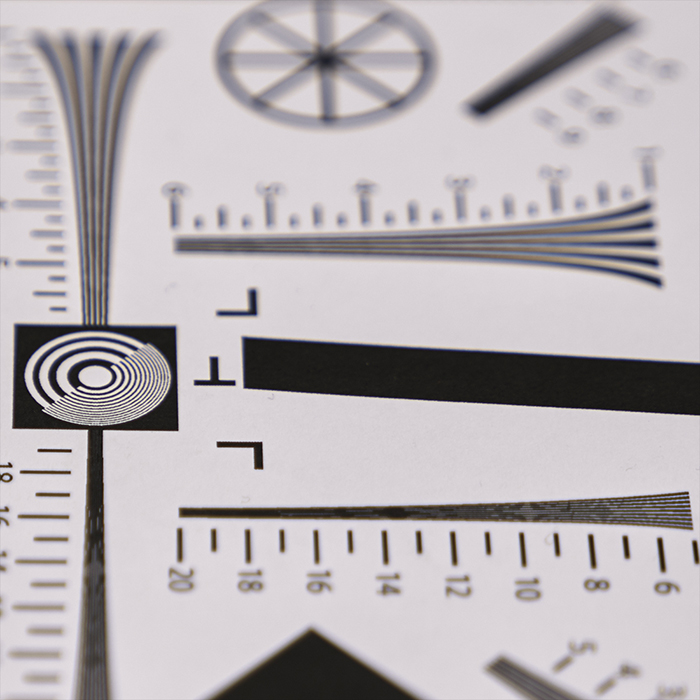 Lateral Chromatic Aberrations are visible in the edge and corner, but I don’t care about them, because they can be easily correced in post-processing. 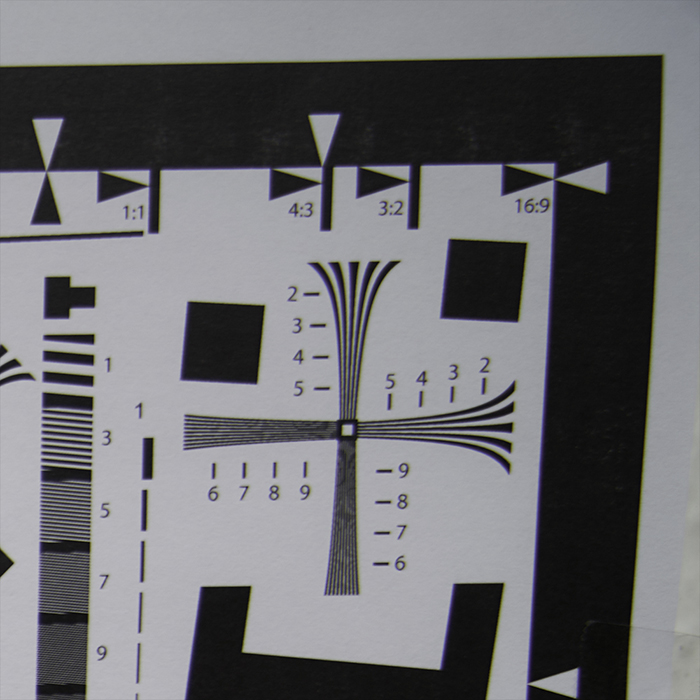 With active inbuild lens correction profile you will get a clean RAW|JPG out of the camera. 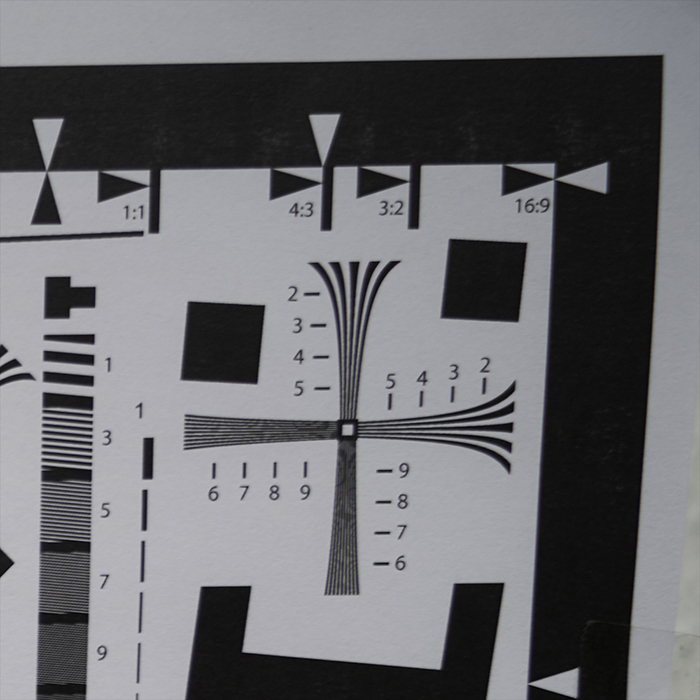 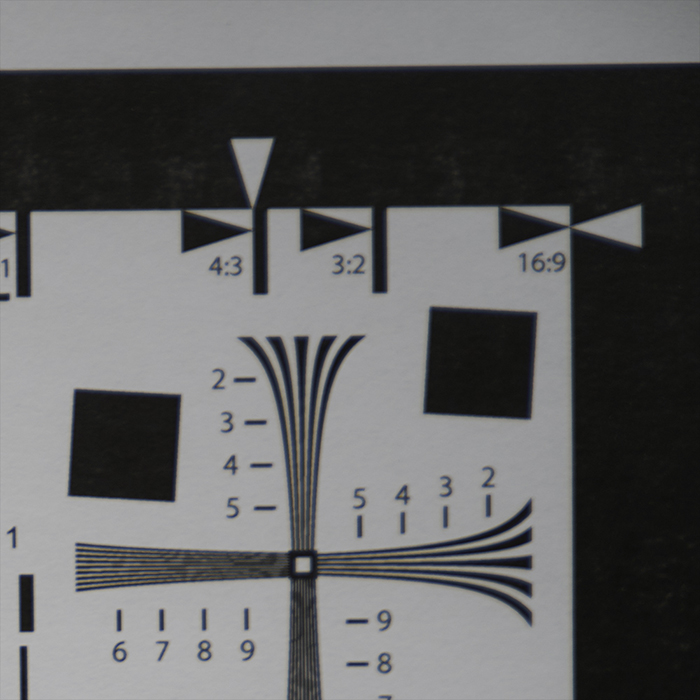 Flares
In extreme situations it is possible to create some lens flares, in normal conditions I had no problems. 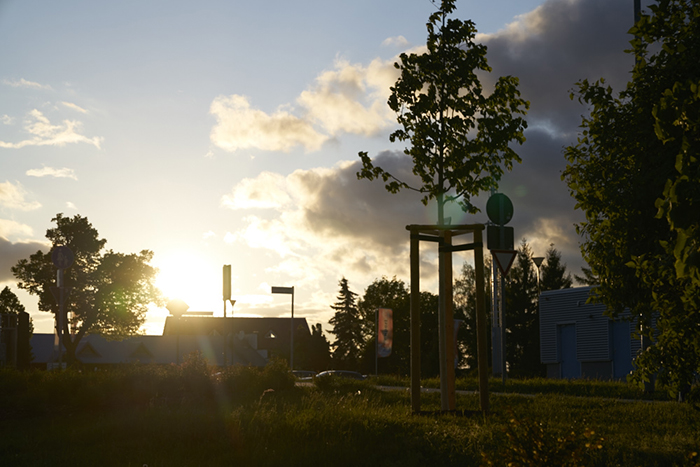 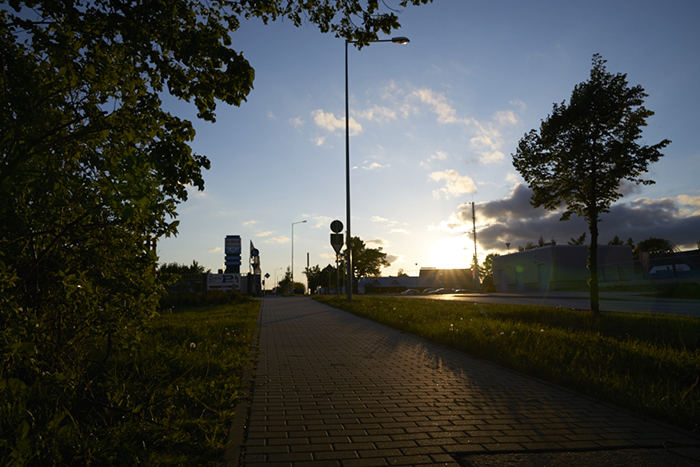 Rendering and Bokeh
If you remember right the Sony marketing says that the lens strengths should be sharpness and bokeh. So lets see what the lens can deliver.
At first I have tested the Bokeh Balls. They should be round and without of onion rings. The results below are very, very good. The bokeh balls are round even at F8 and I also can’t find any problems with onion rings. On focusing the lights I can produce nice sunstars. That looks really good.

The rendering of the out of focus areas is very smooth and soft and nothing is getting nervous. The colors are rich and punchy. 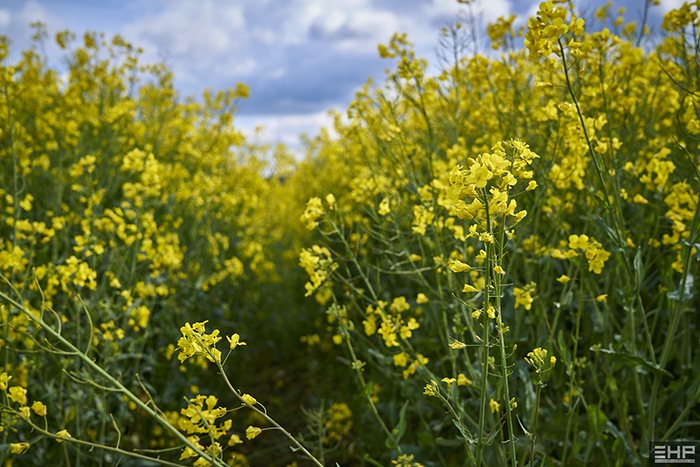 Conclusions
Till now I really like the lens and I’m happy to own it. It’s crisp sharp over the full range and produce nice and wonderful images. The build quality is very well and the AF is really fast. The weight and size is huge, but not more than other F2.8 zoom lenses. The price tag is very high, but I think you get the best standard zoom lens on market. The existing lens errors are almost not relevant, the only downside is the amount of LoCa at 70mm.
I could help you? Thats great! You want to help me? Please check the link below the blow. *cheers*

Check out the example images at eh-photo.de.