Small A7rII deal teaser: I have a good news coming soon for our SAR readers. I am preparing a special A7rII discount for some of you. Stay tuned ;)

We had busy days with the Sony A7rII announcement. Now let’s cool down and read some bloggers opinions about the new camera:

In other words.. the whole nine yards. Everything but the kitchen sink. You asked for it, – you got it. Think of a cliche.
This stands in stark contrast with the rest of the industry that doles our new features slowly, an upgrade here, a tweak there, a new feature once a year or so. This is the norm for some companies… keep the development costs low, and keep selling new cameras with a bit of extra chrome and shiny wheels now and then to keep the faithful happy.
But with the A7rII, following quickly on the heals of the A7, A7r, A7s and A7II, Sony has wrapped all of the goodies (and then some) into one package. Available in August for US $3200, it isn’t even priced as outrageously as one might think a new flagship camera might.

Buyingcamera listed the negatives of the new A7rII camera on SonyAlphaForum post:

Weight on the breaking point of being too heavy
Battery (old fashioned lithium-ion, they could at least design a new 2,000mah battery in the same size case)
No true 14bit uncompressed raw (I’m sure they’d have advertised it if it existed). If bandwidth is an issue, they could give you the option of a 1FPS instead of 5FPS mode. This would be great for landscapes.
No dual card slots or the option for redundancy (even if it used the USB port to write to a separate card reader, that’d be something)
Bigger. Both cameras are uncomfortable to me (I have large hands) and I found the previous model slightly more comfortable.
Price. Sony does what it always does and it’s upsetting to know that it’ll be nearly half the price in a years time. I know digital cameras are destined to be this way but sony pricing scheme has always been more annoying than other companies.
Lenses. FE lenses are sealed, no gasket. Some zeiss lenses either have a gasket and no sealing, or sealing and no gasket. I’d rather they just had sealing and a gasket, like canon lenses.
Sealing. Sony sealing usually always sucks and I doubt this is going to be different.

The a7RII has a better autofocus system than the a7II—a much better system in fact, with hundreds of more phase detection points. It’s so fast that Sony even mentioned in their press conference that the a7RII will be able to focus competitor lenses (e.g., Nikon and Canon) at native speeds.

A7r vs A7rII at CameraSize.

First of all, the native sensitivity of the camera is 100-25600 ISO but can also be extended to 102400 ISO. In video mode, the maximum is 25600. The question is: how good is the A7rII at the highest sensitivities? Because if the gap with the A7s has been reduced, the latter might not look as unique as it did a few months ago. Moreover, many users have complained about not having internal 4K recording on the A7s: you need an external recorder, which means a bigger investment. The A7rII can do everything on its own and since the HDMI output is still valid, the external recorder becomes an option for better quality (4:2:2 8bit) and is not a constraint anymore if you want 4K video. 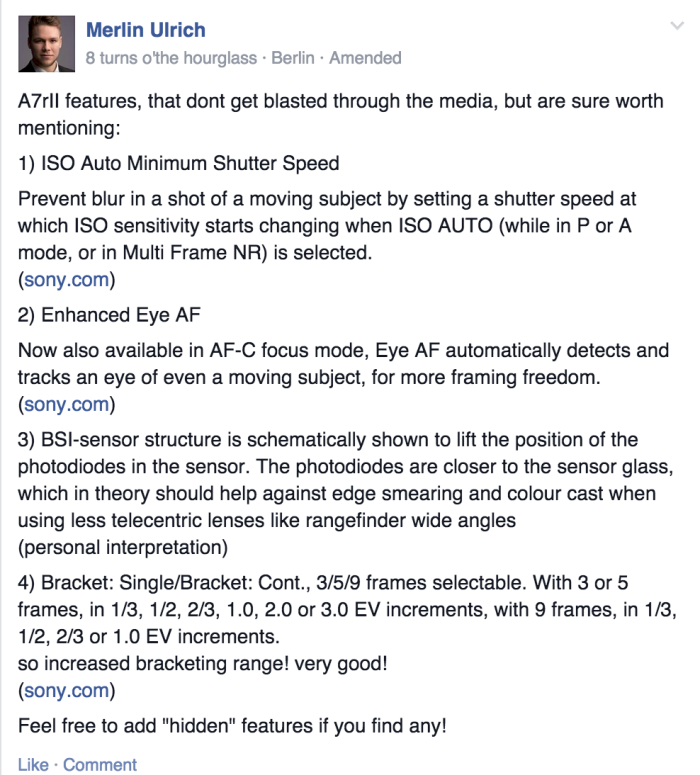 Soundimagesplus likes the new camera but not the marketing:

If you really think 42.4 megapixels is going to take you to realms far beyond your 36 megapixel sensor, think again. It is the same step up as from 18 megapixels to 21 megapixels, a move Canon made without absolutely transforming the images created, or about the same as from 10mp to 12mp. There’s one big difference – it does not make the jump to any larger common print or repro size. Remember going from 6 to 8? That was from sub-full-page to a decent full page resolution, for US or A-size documents at a touch under 300dpi. 24 megapixels took us to a really sharp A2, 36 megapixels takes us to a acceptable A1, and all that 42 does is to make a slightly better A1 but not 300dpi.

The camera is weather sealed, and has a newly developed shutter unit which is designed for vibration suppression, plus silent shooting, and is rated for 500,000 shutter releases! There are currently 13 FE lenses, with Sony planning on having 20 lenses available by early 2016.

Some fun: There is really a SAR reader trying to get money to buy the A7rIi through Indiegogo (Click here). Good Luck!