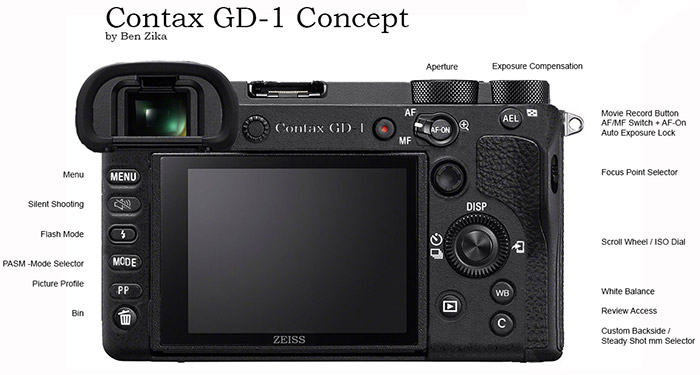 Benjamin Zika sent me this:
You’ve posted a lot of Cameradesigns and Concepts by your readers before and one of the last posts on instagram (the one with the Idea to restart the Contax Brand brand by zeiss) inspired me to create a concept of my own. Another inspiration was that up until the last moment I hoped that the new zeiss camera would be e-mount – I’ve always found the Idea of a 100% photographers camera appealing while Sonys cameras (I do love them anyway!) are Jack of all trades.
In combination I dreamed up what in the Sony line-up would sit between the a6500 and a7iii – a rangefinder style fullframe camera.
As a name I chose Contax GD-1 as a digital continuance of the “asian leica”, the Contax G2 Film Camera. So rather than going retro this should be a state of the art camera in Rangefinder style suited 100% to the need of photographers. The most important thing was to actually ad buttons – I have my A7 configured so that a scarcely have to go into some menu. For most of the time three wheels in manual mode (Shutterspeed/Aperture/Iso) are everything you need! But sometimes you need other stuff too and frankly I don’t want to use a menu system for that and waste time – there’s a reason why TV-remotes still have buttons: because everything needs to be accessible in a fast and certain way. Also I’m not a big fan of touchscreens because I want to use my camera in the cold without freezing off my fingertips ;)
So attached to this mail is my concept – it’s a photoshop composition combining the best of a6500 and a9/a9 and some small additions. I do believe with Sony all the ingredients are there but they need to be rearranged. The Contax Brand would offer the possibility to make cameras without having to fit them into a line-up and to make them photography orientated.
Maybe Sony and Zeiss will see this somehow and be inspired!
Yours
Ben Zika BA (Instagram @ben.zika) 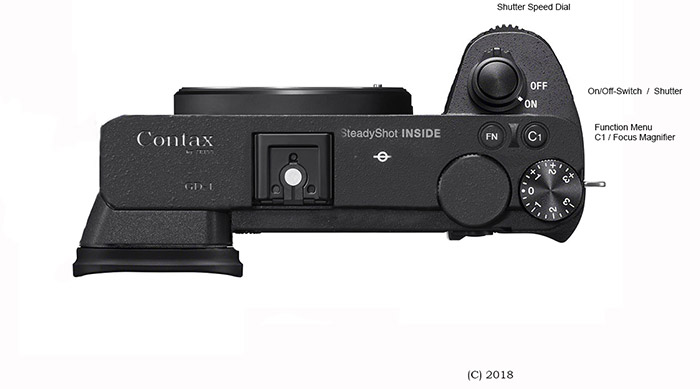