Dear readers,
as you probably know on Sunday Sony will keep a presentation for the press at the PMA show. We will continually update this post with latest rumors and news. So keep following us here! 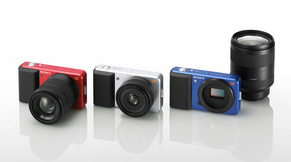 UPDATE 42:
LIVE-> Now he talks about the next Alpha camera which also will use the new Exmor APS HD CMOS sensor. AVCHD compresison Full HD (1080p)

UPDATE 39:
LIVE -> Sony’s strength “We make our own lenses, sensors and processors”

UPDATE 38:
LIVE-> Masashi Imamura is starting to talk about the A7xx!

UPDATE 37:
LIVE-> Sony is talking about the HX5. So nothing exciting now :)

UPDATE 36:
Press conference started! We will update you live with all the informations! Teload the page pressing the “F5” key!

UPDATE 33:
So here we are. Someone sent us the link to the old Sony CES live stream. It doesn’t look like they will stream the PMA event! This is the ols CES stream :(
http://www.ustream.tv/channel/sony-ces-press-conference-2010

UPDATE 31:
Confimrs from another source -> A7xx: 1080 30p recording. In Stock soon after the announcement!

UPDATE 30:
40 minutes to go! There will be no Sony Live-streaming from the event. We are watching all the biggest Sony website and forums and if we find something interesting we will link you to them!

UPDATE 29:
One of our source told us that the mirrorless cameras won’t have Built-in IS to make the camera even thinner.

UPDATE 28:
So now we have the calm before the storm.

UPDATE 27:
So, now it is time to find the name of the A700 successor. If you knwo somehting contact us at sonyalpharumors@gmail.com.
Around the web we fins some names A730 or A735. But what will be the real name?
P.S: If someone is on PMA feel free to send us your pictures!

UPDATE 25:
Editor’s note: Feel free to post our informations on your blog or forum. Anyway I would be happy if you put a link on our website. That’s the best way to support us…thanks!

successor will be available soon! it is not just a concept camera!

UPDATE 23:
Mirrorless cameras do have in LENS Super SteadyShot!

New concept Î± products being shown include an ultra compact model with interchangeable lenses, additions to the Î± family (including a successor to the Î±700), along with new TX5 and H55 Cyber-shotÂ® cameras, new printers and other accessories.

In addition to the current DSLR-A230, A330, A380, A500, A550, A850 and A900 digital SLR cameras, the following concept camera bodies and interchangeable lenses will be exhibited. Current interchange lenses, including Carl ZeissÂ® and G lens products will also be on display.

UPDATE 17:
FROM VERY TRUSTED SOURCE->
Two of the new Sony mirrorless cameras (The Nex3 and the NEX5) should be available in Q2 (between April and June). In summary: Sony will show you mockups of their new NEX mirrorless interchangeable lenses cameras at PMA. The real camera will be nicer! Also the specs we leaked are not completely exact. I was told the cameras do have better specs!!! That’s damn good news guys!

UPDATE 16:
Around the web people is speculating with the A7xx having the same HighISO (12800!) as the Canon 7D

UPDATE 13:
Sony is going to show mockups of the mirrorless NEX cameras. I was told that the real cameras do look better :)

UPDATE 12:
Never used google translation that much. I am reading chinese korean and japanese forums all the time :)
I am also working on the SonyAlphaRumors redesign. I really need to clean up the website!

UPDATE 10:
I am back again (it is early in the morning here in Europe).

UPDATE 9:
It is midnight here in Europe. I will take some rest and check for rumors early in the morning. Tomorrow it is going to become a very exciting day!
P.S.: keep following us! We will update you with every news we found around the web!

UPDATE 8:
One of my trusted sources didn’t give me any specs but he has seen the camera and told me that “I review many cameras…and I really believe the Sony A700 successor will become a Hot-Seller. I would definitely buy one!”
The same feeling has been expressed by the administrator of the Dutch Sony forum: “I think the best APS-C cam I’ve seen in times…Everything, but really all the trimmings…There is really very hard work by Sony to get all this together”

UPDATE 6
Sony could show mockups only of the new mirrorless cameras! So probably no real camera yet? We hope some of our trusted sources can confirm (or deny) the rumor soon.

UPDATE 5
We are continually checking around for more news.
If you have rumors/news to share contact us at sonyalpharumors@gmail.com

UPDATE 4
We also expect the new 500mm lens to be finally unveiled. According to one chinese rumor there could be some more lenses (all primes). This rumor has not been confirmed by our soruces.

UPDATE 3
The president of Sony Spain said 3D Cybershot cameras should come very soon (probably at PMA). We don’t know if they will show mockups or market ready products.

UPDATE 2
Sony is going to show us the future camera concepts. This probably includes the pellix mirror based Alpha camera (not confirmed from our sources).

successor is going to be unveiled at the show. The camera records video and includes all latest Sony improvements. We were told that the Sony A7 series will be pretty awesome!