One image to rule them all: Sony CAN make very compact FF lenses ;)

Photographer Sator is creating quite a buzz with his article “Why Sony’s Full Frame Pro Mirrorless Was a Fatal Mistake“. (Read here on PetaPixel).

I thought long if I should answer to this or not. I think there are many things “omitted” in his analysis and I want to point out some of those points. But first a disclaimer: I am not a Sony fanboy. I pointed out many Sony issues lately that I think are very annoying. For example service issues, horrible menu system, lens production quality issues and so on. Sony has still a long way to go to completely satisfy customers. That said I think Sator is not right on some of the points he mentions in the article:

Let’s start with something I do agree with Sator: “SIZE” is not the major reason why you buy into the Sony system. In my opinion it’s Sony innovative tech package that makes the E-mount system popular. It’s not the “mirrorless” aspect that makes it attractive. But mirrorless is necessary for most of these innovative features to exist (like EVF tech, focus peaking and so on and on and on).

Sator also said: “Sony have failed to overcome the laws of physics. If you take something from the camera body, you have to give it back to the lens, and by the same amount.“. Well it’s true that most of the FE lenses are big. But here is Sator’s first mistake. He assumes FE lenses have to be big because “of the law of physics“. Please Sator give us the physics formula that says that? Where is the mathematic supporting your argument? Instead you bring up size comparisons made via CameraSize that are very questionable (more about it below).

He also misses to understand that Sony just started a system from scratch and the Sony declared main focus was to create very high quality lenses as first. And he assumes that because most of the current FE lenses are big this means we will not get smaller FE lenses. But that’s an assumption and not a “law of physics“.

Let’s discuss some examples he brought up by using the CameraSize tool: 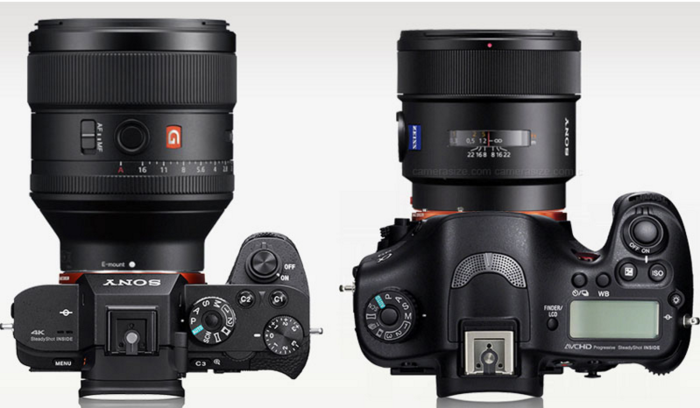 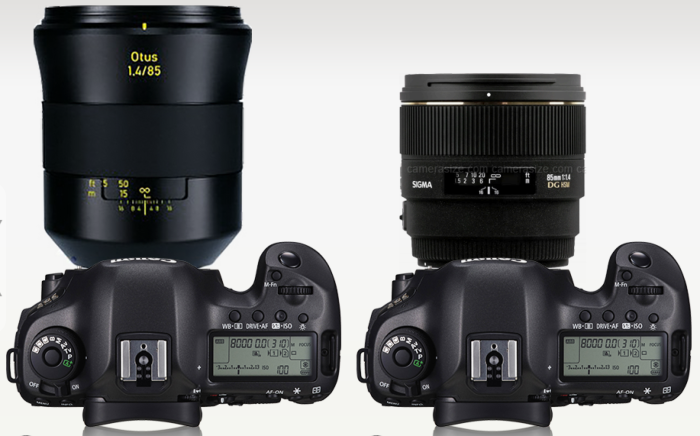 So let’s please compare lenses with “similar” image quality: For example the [shoplink 46527 ebay]Loxia 21m FE[/shoplink] and the [shoplink 46529 ebay]Milvus 21mm[/shoplink] lens. Note that CameraSize aligns the cameras including the EVF rubber. I re-aligned the images based on the camera back without the big rubber. I added the Loxia 21mm for myself as it’s not in the Camerasize database yet.

Look at how big the difference is! 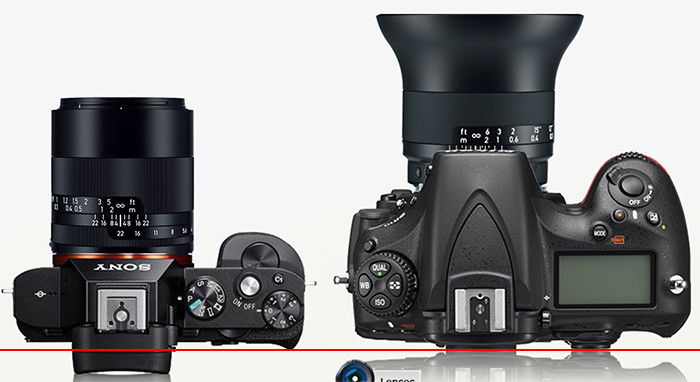 And to put it into “weight” terms. The Sony-Zeiss combination weights around 1kg and the Nikon-Zeiss combination around 1,7 kg. That is a Big weight savings! Sator writes that with Sony “FF mirrorless bodies you end up having to carry multiple batteries, which negate any size advantage.” A Sony battery weights around 40g. Even if you take 1 or even 2 additional batteries the weight difference is still huge!

Again if I would stick on Sator’s error to not take into account that lenses are also designed for different image quality performances I could play this game:

You see? The Full Frame Sony with 16mm f/2.8 APS-C lens is way smaller than the APS-C X-PRO2 with 14mm f/2.8 lens :) Of course I do know the Fuji lens is a better lens here (and it’s 14mm and not 16mm). So I call this an unfair comparison. But if size is all that matters well Sony is smaller in that case!

The size is the same but the Sony has built-in IBIS and FF sensor in it! Impressive or not? So yes! Sony can make excellent quality and very compact lenses. And if Sony is reading this…please give us more of those :)
And please do note the Zeiss 35mm FE is “undoubtedly a very good performer” (to cite Photozone). Sony didn’t trade image quality for size on that lens.

The Zeiss FE 35mm and the Sony 28mm FE lenses do show that FF E-mount lenses CAN be more compact than similar performing DSLR lenses.
Moreover Sator didn’t recognize that owning a Sony A7 camera gives you an extreme flexibility: If small size is what matters you can use small APS-C or FF lenses on the very same E-mount. If extreme quality is what matters you can use the bigger FF GM lenses. Such a flexibility is yet second to none in the camera business!

When comparing the Batis 85mm f/1.8 lens and the Fuji 56mm f/1.2 lens he writes that the Fuji lens “allows you to shoot faster in low light. The Sony makes up for the slowness of the lens with IBIS, but this won’t stop action in low light.”
He completely omits the fact that Full Frame sensor do have a much better High ISO performance. This means you crank up the ISO to get the shutter speed you need. So he is plain simple wrong when he says that a Fuji can shoot faster shutter times compared to a Sony FF.

Sator says Sony Image stabilization is degrading the image quality. I think this is Sator’s weakest argument. He brings up some quotes from Fuji, Sigma, Zeiss (Nor Sigma nor Zeiss do actually talk about Sony IBIS) to somehow convince you that E-mount was not designed to have IBIS. He doesn’t bring a real actual proof to support his thesis. All reviewers so far have stated the Sony image stabilization does a superb job. Dear Sator where are the actual FACTS supporting IBIS on Sony does hurt image quality? Can you proof it?

I do agree with Sator that adapting lenses can be problematic. Many wide angle lenses do not perform well on Sony cameras. And you really need a very high quality adapter to avoid micro misalignment. He quotes Lensrentals to reinforce the argument that this is a problematic matter. But he lacks to mention also the “positive” aspects mentioned by Lensrentals. I do quote:

Just to show three good reasons why it makes sense to adapt such lenses!

Sator: “This is something that is not yet the default modus operandi on most DSLR, but a new hybrid viewfinder patent from Canon suggests exposure preview is soon coming to DSLRs.“. Sticking to facts…Mirrorless is superior yet. A patent doesn’t change this now ….and just my two-cent guess…it will not change the future neither ;)

Message to Sator:
The point here is not to put any blame on you. I am very happy about the article you posted. It’s a good chance to discuss the matter! The intention of this post is to point out that you may have forgotten to mention some points and advantages of the Sony system. And while it’s fun and legit to speculate you have to separate facts from speculation. I am particularly talking about the arguments you made on Sony’s Image stabilization system.

A pro Fuji statement:
Sator is a Fuji photographer. And just to make it clear once again. I am no Sony fanboy. And as a “pure” photographer I will go so far to say that Fuji’s APS-C system is superior to Sony’s APS-C system. I can only hope Sony will “copy” many of the good things FUji did in those years!

Language disclosure:
My main language is German and Italian. My english is poor. Sorry for that when reading that article :)