Image of the three cameras via Focus Numerique.

The French site Focus Numerique (translation here) compared the top three Sports Photography cameras (Nikon D5 vs Canon 1DX Mark II vs Sony A9). On their site you can download all the JPG and RAW ISO test images to make your own testing. Focus Numerique conclusion is that the Sony A9 wins this test:

The additional 4 Mpx of the A9 and a less aggressive noise reduction allow the Sony to better render details at all ISO sensitivities.

UPDATE: After Angry Photographer criticized me I remade the comparisons between the A9 and D5. So here are some comparison crops between the two cameras. But really, I do invite you to download the images for yourself and do your own testings. I even saw some comments on SAR with people saying the D5 image is better and then people realized they switched the images. This is just to say you have to be careful when reading comments of people or following the rant of Angry Photographer ;) 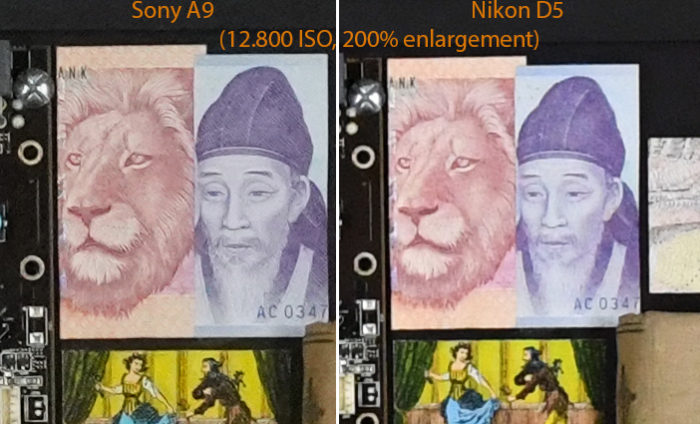 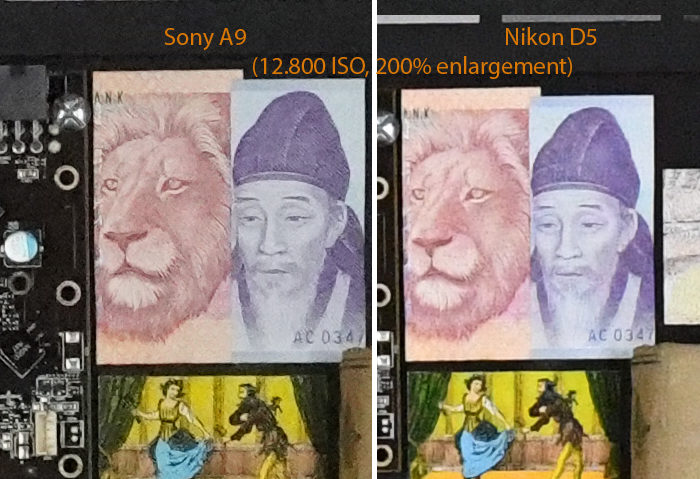 At this sensitivity, the Sony A9 clearly takes the advantage over its two competitors: the overall level of detail is superior thanks to smoothing less pronounced, while the granulation remains rather fine is aesthetic.

ISO 204800 comparison with 200% enlargement (this is the image criticized by AngryMan). Here I did note something strange. In the center of the image the D5 shows the numbers on the money bill more clearly while at the same time the A9 shows more detail on the Lion and on the face (see the beard on top of the mouth): 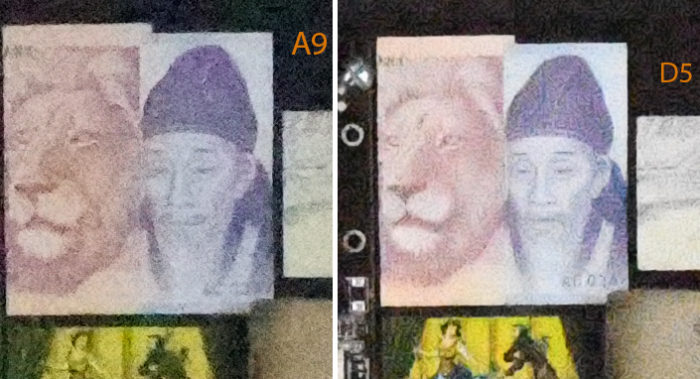 This is again the 204800 ISO image with the Canon (This is the image I posted yesterday): 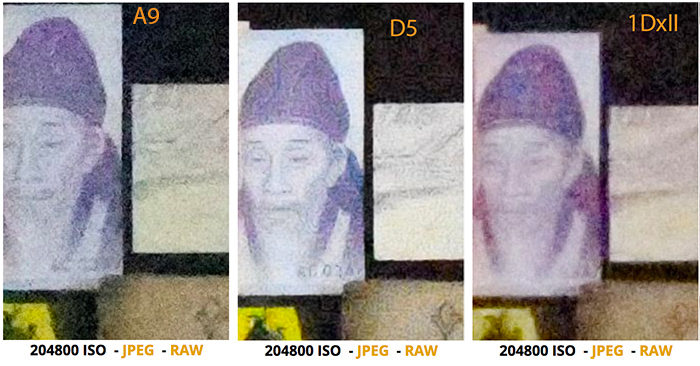 And if you move towards the corners of the image the A9 is clearly sharper on the numbers (see the vertical 1 to 6 sequence on the right): 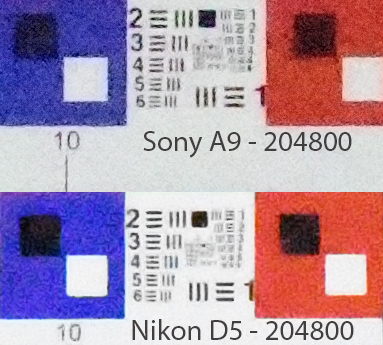 So my impression at 204800 ISO is the following:
1) Sony image has more detail (lion image, orange strip above the lion, beard of the face on the money bill…)
2) Nikon does a better job sharpening the details in low contrast situation (see numbers on bill). While Sony sharpening does a good job when contrast is high (see Black numbers on the white background)

To answer Angry Photographer: I don’t agree with him claiming the D5 wins just because of the numbers on the bill being better displayed at ISO 204800 ISO. Because he is cherry picking one specific detail of the numbers on the bill and the logo on the book. At the same time he missed to acknowledge that on the very same image the A9 shows more detail on the face and the lion and also shows the numbers and details better when there is clear contrast (see the Black numbers on white board). So yes, the A9 has one weakness: Sharpening applied on low contrast situation at 204800 ISO. But at all other lower (and useable) ISO settings the A9 wins.

UPDATE: Angry Photographer is also misleading you with that:

And if you read me Angry Photographer, I am no fanboy, I do agree with you Sony service sucks in USA :)