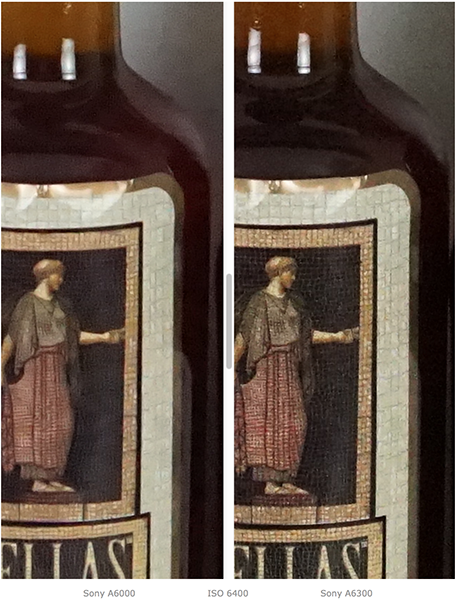 1) The image above shows how big the improvement on the new A6300 is. Imaging Resource writes.

The lack of in-body 5-axis image stabilization is one of the biggest differences when comparing the camera to the a7II series. If we look at the a6300 as an action shooter however, which seems to be the way its been marketed, it can be understood that high shutter speeds aren’t benefitting from image stabilization anyways, and instead there can be improvements made to high ISO image quality and also maintain the sub-$1,000 price point.

Why would you choose the α6300 over the α7R Mark II? Well, you probably would want to have both! But if you had to choose, this one offers value for the cost, speed of focus and light weight. You do lose a little versatility, however. There’s no headphone jack. There are fewer customizable buttons. It’s not a full frame 24 x 36mm, 42 Megapixel sensor. Having both cameras is really the best choice as each has its own virtues.

My overall impression since I received the A6300, a wonderful little tool for stills and video, as long as you keep its limitations in mind.
Can you guess which clips came from the A6300 and which from the A7rII? :)

5) Gary Fong posted the next A6300 tutorial: “Sony a6300 Auto Focus For Sports Photography”