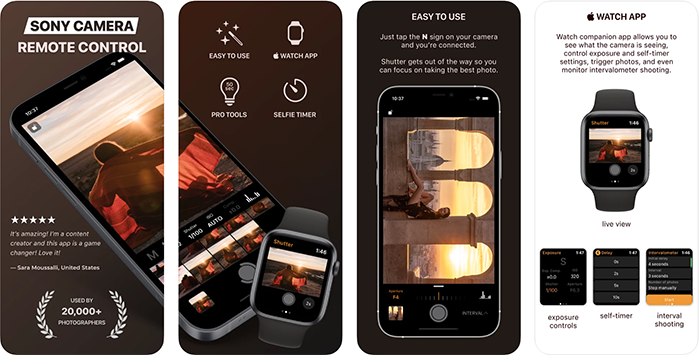 The new Shutter – Sony Camera Remote version is available for iPhone and iPad.

The biggest news is the introduction of tap to focus in photo mode for cameras that don’t officially support it. With the new version, users can use the app to control focus points both in photo and video modes on Sony a7C, a7S III, a7R IV, ZV-E10, as well as all cameras with Sony’s PlayMemories support.

(With the official Imaging Edge Mobile, those cameras only support tap to focus in video.)

Unfortunately, some of the most popular models such as a7 III, a7R III, a6100, a6400, a6600, RX100 VII, ZV-1 still don’t support focus controls at all. For owners of those cameras, we’ve prepared a short focusing guide to make the most out of their gear: https://shutter.dev/guides/focus-help/

Shutter was born as a tool to help take better selfies during one of our trips to Swiss Alps. Since then, it evolved to be a trusted tool among hobbyists and professional photographers.

Please visit https://shutter.dev to learn more about the app, or contact Grzegorz (the developer) directly at help@shutter.dev I’m always open to feedback and suggestions and generally respond within 24 hours.