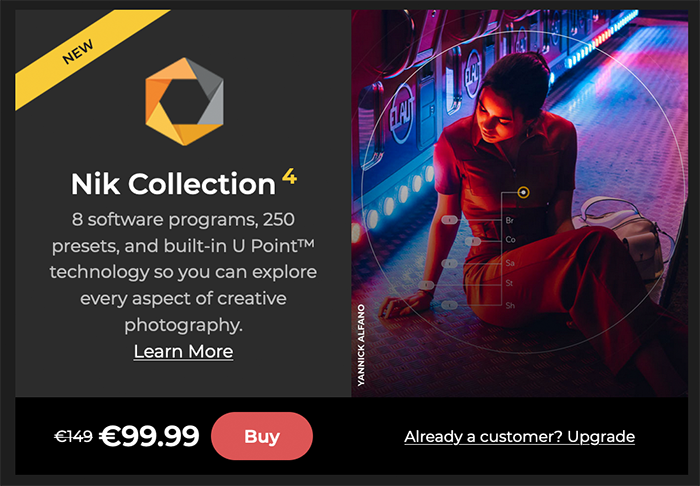 Til midnight you save 30% off on Nik Collection 4. Download a free trial version here.

And they also released the new 4.2 version:

Nik Collection 4.2 can be used with Adobe Photoshop CC in native mode on Apple computers with a M1 processor (version 22.3 and up).

“Users of Photoshop 22.3 (and later) working on a Mac M1 can run it in ‘native’ mode or with the Rosetta emulator. Up until now, they had to use Rosetta to be able to run Nik Collection.” recalls Jean-Marc Alexia, Vice President Product Strategy. “With the 4.2 version of Nik Collection, users can now opt to run the software in ‘M1 native’ mode and enjoy an optimized user experience”

The Nik Collection’s flagship software plugin, Nik Silver Efex, features a range of exclusive presets and effects designed to simulate classic analogue films, including Kodak Tri-X 400, Ilford Delta 100, Fuji Neopan, and more. Its range of customized presets lets users vary the grain structure and contrast characteristics of their photos to accurately reproduce some of the most iconic black-and-white films in the world.

With Nik Collection 4.2, Nik Silver Efex has once again improved its U Point technology. Control Points, which make it possible to locally adjust contrast, edit brightness, and structure specific areas in the image with infinite precision, have become even more responsive. The photographer’s workflow has become even faster.