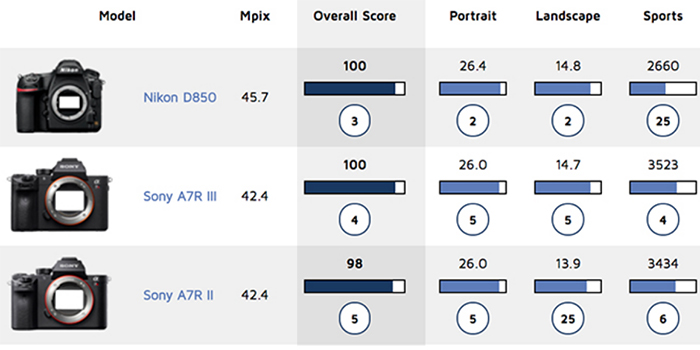 It’s clear that the Sony A7R III has a high-performing sensor that’s capable of capturing images with a broad range of color and tone, while keeping noise well under control.

However, comparing the A7R III sensor to the Nikon D850’s reveals the advantage that the Nikon camera’s lower minimum sensitivity (ISO) value brings. Photographers who predominantly shoot in bright light or capture motionless subjects with the camera on a tripod will record the most information, be it color, tone, or detail with the Nikon D850 set to ISO 32. However, if they require values above that, the Sony A7R III sensor produces marginally better images.

Sony’s in-body 5-axis image stabilization system is widely respected, and if it achieves the 5.5 EV shutter speed compensation in the A7R III that the company claims, it would enable the camera to capture images at ISO 100 instead of at ISO 3200 (provided the subject is stationary).

It’s impressive to see that Sony A7rIII matched the D850 despite two disadvantages: The Sony has no ISO 32 option and four less Megapixels. It would be nice if Sony could add lower ISO settings via firmware upgrade. But maybe I am asking the nearly impossible as it’s likely you need hardware to support this too?

Still to be honest we would rarely use ISO 32 in real life shooting. And from ISO 100 towards the A7rIII beats the Nikon on all charts: