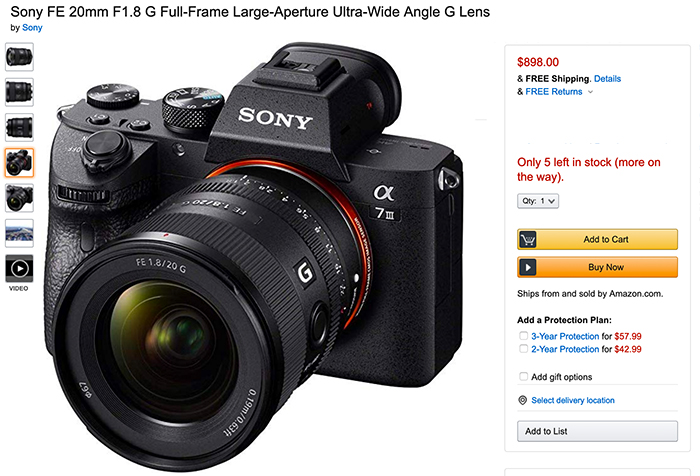 In the grand scheme of things, the Sony G lenses seem to be a bit underappreciated whereas the GM lenses collect all the glory. However, we think that the G series could actually be THE reason for serious amateurs to prefer the Sony system over Canon/Nikon/L-mount. These lenses strike the perfect balance between costs and performance. The Sony FE 12-24mm f/4G, 90mm f/2.8G, FE 24-105mm f/4G, and FE 200-600mm f/5.6-6.3G are all excellent choices … and so is the Sony FE 20mm f/1.8G.

The Sony lens offers breathtaking sharpness in the broader center zone at all mainstream aperture settings. The corner performance isn’t quite as high but it’s very usable at f/1.8 already and very good at medium aperture settings – all with minimal field curvature and low astigmatism. As such the lens is also feasible for astrophotography. The native image distortion is low and nicely corrected in auto-mode. The same goes for lateral CAs. The biggest weakness of the lens is vignetting. It’s rather extreme at f/1.8 in raw files and not overly impressive even at f/5.6. Image auto-correction comes to the rescue here as well so usually, you will just spot some light falloff at f/1.8. An almost baffling aspect is the quality of the bokeh. Wide-angle lenses are usually rather mediocre in this respect – at best – whereas the FE 20mm f/1.8G is actually impressive with smooth highlight discs that can maintain a circular shape even in the image corners. And the general blur characteristic is good, too.

The build quality is excellent thanks to high-grade materials and a tight assembly. The lens doesn’t extend during focusing and is sealed against dust and moisture. Sony also added some mechanical goodies such as a dedicated aperture ring including a clickless mode and a focus stop button. You may argue that it would have been nice if they also added optical image stabilization but we think it’s good that they avoided this temptation. Especially ultra-wide lenses require precise centering and an image stabilization group would have made things more complex here – besides the extra costs. Another positive aspect is the compact size and low weight.

The Sony lens isn’t cheap to boot but then it’s also faster than your average 20mm lens. As a rule of thumb, an extra stop doubles the price tag. Keeping this in mind, the price of around 900USD/EUR is still reasonable. And we conclude our verdict with … highly recommended!