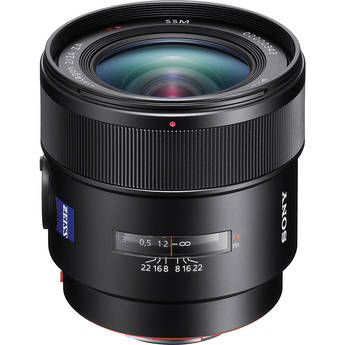 Following rumor is not from our sources so take it easy! It could be true it could be wrong!

At Dyxum forum member with the nickname “boyanphotography” affirms that “Today I talked to the Zeiss guy at IBC, and he told me that at Photokina they will launch the full MF line of lenses for A-mount (18mm all the way to 100mm (including the 50 1.4), they start with bringing the [shoplink 3962]100 macro[/shoplink] on the market at beginning 2011).

Also, he said Zeiss/Sony will release a new lens at Photokina (besides the 24)!!!
He said he couldn’t tell me what lens, though he said it’s a very big one

In the meanwhile Kurtmunger noticed that the new Zeiss 24mm lens “does not appear anywhere on their site as of 21:44, 9/12/10 EST. Apparently, Sony’s US website was down on Saturday for maintenance(?)  As I was trying to update some links to the CZ 24mm F/2 lens I noticed it was gone on the Carl Zeiss lens page.  Could it be a mistake?  Or is Sony having troubles again?  Since last week, Sony has very quietly pulled the A560, A580 and CZ 24mm F/2 from their US website, I’m not sure about other places.  Very strange actions here.  I remember the date when the CZ 16-80mm was promised, and it ended up being released six months late. ” BHphoto is still taking preorders (approx. arrival November)

UPDATE: The Sony 24mm lens in available for preorder in all other worldwide sonystyle stores. Very likely it’s just a Sony US mistake…