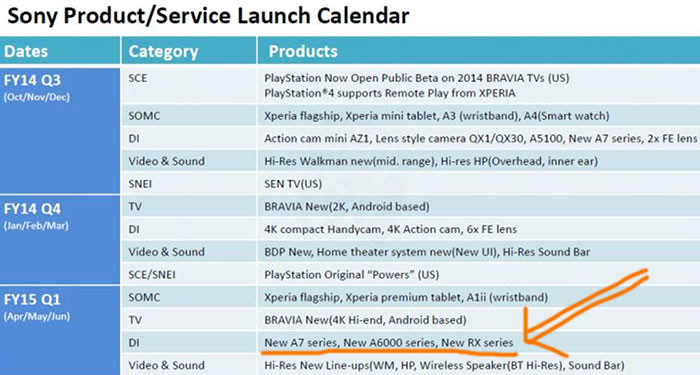 It’s SR5, just got that proof (Thanks P:L) that a new A7 series camera a new A6000 series camera and a new RX camera are going to be announced between now and end of May. The image on top is the official Sony Product launch Calendar til June 2015 leaked by Wikileaks. Of course there may be small changes because of uncalculated events (for example A6000 successor overheating issue). The bad news is that there is no A-mount stuff on that list. This means on April 23 Sony will announce new RX stuff and in early-mid May the new A7rII and the new A6000II.

This is now SR5 which means there is now a 90%+ chance I am right on that rumor! P.S.: Glad to hear that my A7rII, A6xxx and RX rumors were correct :)

Important UPDATE: A reader posted that image of a document saying the A99II and A58 would be discontinued in July. I just wanted to add that no such document is available in Wikileaks. I asked the commenter who posted the image to send me the file. he said he would be he didn’t. I believe that guy just wanted to fool our readers in the comment system!