Koreatimes writes that :”Sony is confident that the latest additions to its Alpha series of translucent mirror cameras will prove to be among the first of many intriguing products that could eventually shake the (Canon/Nikon) hierarchy.“

They interviewd Mr.Kimihiro Itoki, who heads Sony’s Korean business. He said that “Sony looks to edge Nikon for second-place in the interchangeable lens cameras market here, including both the DSLR and the new breed of high-quality shooters, by the end of next year, to gain on Canon. The latest Alpha models will help us claim and solidify the second-position in Korea’s interchangeable lens digital cameras market and narrow the gap with Canon.’’

Sony had about 20 percent of the Korean market in interchangeable lens cameras at the end of the third-quarter, due to the popularity of its Alpha Nex mirrorless models. Sony has established leadership in the emerging market for mirrorless cameras here with an estimated market share of 40 percent due to the popularity of the Alpha NEX. The goal is to achieve a 50 percent share, Itoki said.

Some more video samples have been posted by one of our readers on youtube: http://www.youtube.com/user/Canrocked?feature=mhum

Reminder: The A55 is in Stock at Amazon US 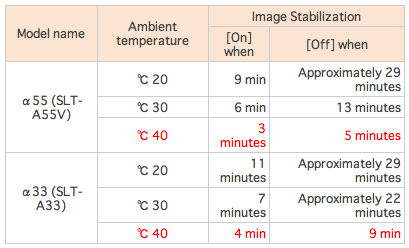 Sony Japan posted some more details about the Overheating issued (See graph above). By the way, we tested the A33 and didn’t notice any overheating problem at all!

Amateur Photographer magazine has a Sony A33 review.

TrendyNikkei interviewed the Sony team that worked on the NEX-VG10. There is also a review on Ascii.jp.

Via ImageSensorsWorld we learned that “Sony will subcontract the manufacture of CMOS image sensors to Fujitsu in an arrangement aimed at lowering production costs without revealing proprietary technologies to overseas foundries” and “The deal with Fujitsu should allow Sony to meet growing demand for image sensors while keeping production costs in check and safeguarding its proprietary technologies in Japan, the Nikkei business daily reported. A spokesman for Sony said the electronics giant has been considering outsourcing some image sensor production to meet strong demand driven by growing sales of advanced digital cameras and smartphones, but declined to comment further. A Fujitsu spokesman declined to comment.”

Is that good or bad news? Let me know what yu think…

Ahi Ahi Ahi! Sony Japan says that the video recording time on the A33 and A55 are limited because of the overheating sensor! The A33 can redord 11mintues only and the A55 9minutes. If you switch of the IS you will be able to record many more minutes. Sony also suggests you to “Avoid direct sunlight as possible“. Not really good news…

Reminder: Two months ago Cosina/Voigtländer announced the M-mount adapter for Leica which is already [shoplink 3491]available on eBay[/shoplink]