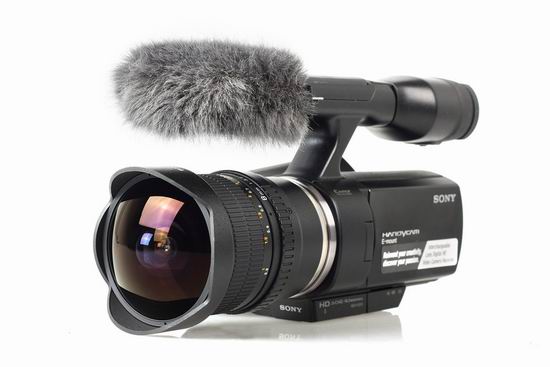 That’s a suprise! Samyang just announced the new 8mm f/3.5 FISH-EYE CS VG10 lens designed specifically(!) for the [shoplink 3058]Sony NEX-VG10[/shoplink]. There are no info about the price and availability yet. They also said that “We are also about to introduce Samyang lens with Sony E mount for NEX system cameras.” You can find a few images of the lens at optyczne.pl.

Press release:
“Kraków, February 28 2011 – Delta company, the sole distributor of Samyang Optics for Poland and Europe, wishes to inform about the release of the manual Samyang 8mm f/3.5 FISH-EYE CS VG10 lens. The new lens comes with the bayonet mount and has been designed especially for Sony NEX-VG10 digital camcorder.
Due to its unique construction, the bayonet mount has been adjusted to ensure possibly wide field of vision without producing the vignetting effect. Just like in other lenses manufactured for filming purposes, aperture can be easily and smoothly adjusted.
New Samyang 8mm f/3.5 FISH-EYE CS VG10 lens will be officially introduced during the forthcoming Focus on Imaging fairs held in Birmingham. Exact date of the release as well as the product’s retail price will be given later.
We are also about to introduce Samyang lens with Sony E mount for NEX system cameras.”