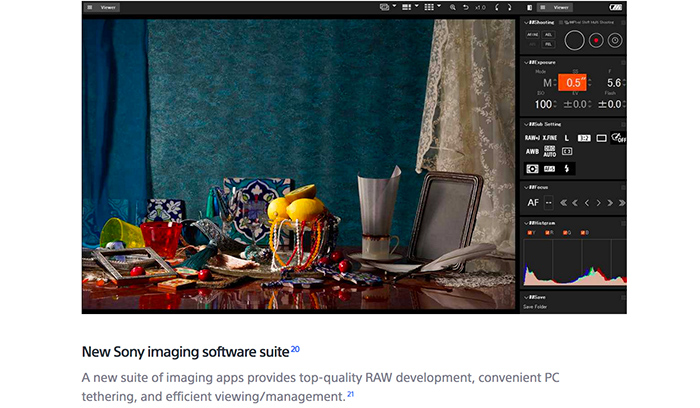 Alin Popescu had the chance to shortly see the new software and writes:

Imaging Edge provides three applications called ‘Remote’, ‘Viewer’ and ‘Edit’, that will be available for free download, which will support live-view remote shooting and RAW development. Also Edit will take care of the Pixel Shift Technology.

We’ve seen a pre-beta version of the software and I was curious about the Viewer capability to sort images fast, something similar to Photo Mechanic. Good news is that we don’t need to import a folder to select and rate photos. The bad is that we’ve seen it on a slow laptop and I can’t make a guess on how fast this software will be.

On Remote I’ve been attracted to the Manual Focusing feature: you have some controls on software with minor and major movement of focusing, directly from the computer. Lenses with Piezoelectric focusing motors, will be as precise as 1/1000 mm incremental movements. Add this to the magnified focusing and 42 mpx of resolution and you’re going to be the most precise photographer in focusing :).