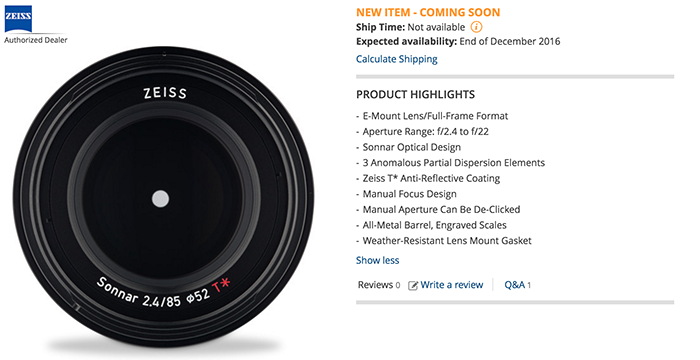 The 85mm Loxia didn’t get much love by SAR readers. But if you can get over the noo so fast aperture limatation the lens seems to be quite a stellar performer!

Phillip Reeve is testing the lens and writes:

So, who is this lens aimed at? I think people looking for maximum image quality who don’t need a faster aperture and therefore do not want to pay the size, weight and price penalties that come with the Otus lenses. This lens is quite similar to the Loxia 21mm 2.8 in terms of contrast and corner to corner sharpness, in case of the latter I tend to say even better. ANd sharpness is great across the whole distance scale, at infinity and at the minimum focus distance.
The quality of the bokeh wide open is also quite nice as the lens features many special glass elements with anomalous partial dispersion but not a single aspherical lens, so you won’t encounter any onion rings making it actually a nice “allround” lens.
To be honest I haven’t found a real flaw yet, coma performance wide open isn’t great, but for an 85mm lens this is not of real importance to me.

This image is a jaw dropping testament to what the Loxia 85mm f/2.4 can deliver at f/5.6, though full effect can really only be understood at the 28 megapixel size and with the crops on an iMac 5K—unbelievably crisp. It is as good as an Otus and its performance is achieved under low contrast bluish light. Every tiny branch and twig is sharp everywhere in the frame, excepting the OOF nearby trees. I wish the image had been recorded on a 100 megapixel sensor.

The lens can be preordered at BHphoto, Amazon and Adorama. In Eu at Amazon.de.