Neutralday claims to know the specs of the Fullframe Sony Alpha 750!

They recieved this specs from an anyonmous sender. So take it for what it is…a rumor only!

The korean forum SLRCLUB made a very long review of the . It is written in korean but there are many videos and interactive images. You can visit the site and see it for yourself:

P.S.: The camera is in Stock at amazon: 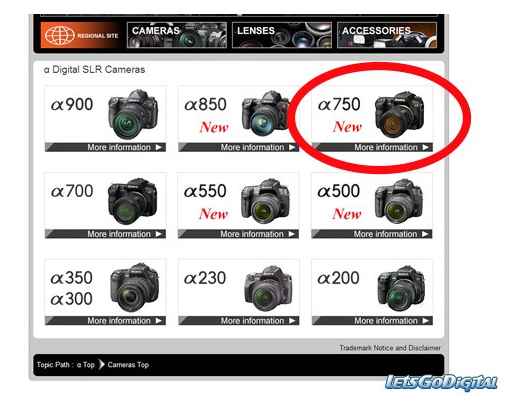 A new forum poster inside photoalphaclub wrote following”prediction” about Sony’s next stuff:

DSLR’s have 2 major problems: 1. Mirror that slows down the frame rate. 2. Mirror that causes long “lens to sensor plane” distance.

So APSC DSLR’s will be replaced by EVIL cameras in the future – with electronic shutter and high frame rates. Sony new prototype 3D video camera uses frame rate 240 fps at 2×2 MP.”
and
“Sony knows that by eliminating the mirror, a superior system could be developed. Sony is in the forefront of display technology, unlike Conikon, so it can produce better EVF than the competition – a VF that will not go dark with the push of DOF preview button, or when it’s dark outside. It will also zoom and allow for easier manual focusing. Add OLCD’s. The OVF suddenly loses its strength. If Panasonic, Olympus, and Samsung are working on EVIL, so is Sony. Look at their past and you will understand. Also this is the only explanation for the gap between the 300 and the 900 series, as the 500 series is only an extension of the 300 series. The 850 is only an extension of the 900 series.

It is my belief that Sony will fill the gap between A550 and A850 with a superior EVIL system, maybe with 14 and 18 MP bodies, which will be, with an adapter, usable with A-mount lenses .

APSC will be phased out in time. Current FF will be expanded up and down.

If Sony planned to bring out A700 replacement, it would be here by now. The hole in product offering between FF and APSC has existed in Japan now for some time. This is not normal. Sony is dumping A700 even in India, where it has otherwise hardly any presence.

Sony created, from their A200-350 line, the two new lines, one is the 500 line. There is no 700 camera (line) replacement. The APSC lens offering is weak, although APSC is the Sony’s bread and butter.

Few FF’s are sold, but all new serious lens offerings are FF.

EVIL camera can have same or better resolution as FF, because of less diffraction. The lenses will be smaller. The cameras will be lighter and can be smaller.

EVIL will make APSC redundant. FF will still have an advantage in DOF control and sensitivity. You need to have it to demonstrate that you play with the big boys.

I see it as follows: