Sonyalpharumors can give you some “special” infos about the Sony NEX

Lens
Lens body is using two motors. One is electromagnetic and completely mute so that it will not record the motor sounds during film-recoridng.
Originally the Alpha lens

adapter was planned to support contrast type AF. But because of complications it has been removed. It Future firmware updates could add autofocus support!

LCD and Menu
LCD automatically adjust brightness sensing external light source.
The LCD has 55% more brightness than the LCD from the Sony A550

(contrast is also higher).
NEX5 face recognition can distinguish between adults and children faces.
The NEX menu interface has been designed by Sony Ericsson

3D
The future new “3D video” function will be added via firmware update in July. But only 3D Bravia

Production and Marketing
The NEX system will be produced in a new plant in Thailand. There will be no reduction of the Alpha system production.
Sony DSLR offensive will focus on Europe.
Sonys goal is to sell 10 million worldwide NEX cameras.

We expected the Sony NEX cameras to be cheaper than MicroFourThirds so we compared the current prices with other (compact!) mirrorless cameras:

Few lucky guys had the chance to hold the Sony NEX in their hand and it is tiny (take a look here on dpreview forum). A very serious ISO comparison has been posted by Focus Numerique. The test prooves once again that Sony managed to archieve awesome High-ISO quality. Let’s hope future firmware upgrades will be made for our current Sony Alpha

Probably they are testing a preproduction version of the Amazon Österreich

so autofocus speed could still improove. Looks like the Panasonic GF1

performs better. What do you think? 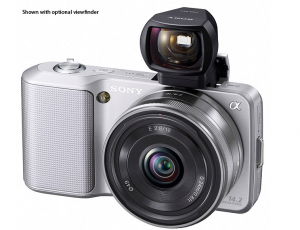 is not an EVIL (electronic viewfinder, interchangeable lens) camera since it does not have an EVF.
2. NEX stands for New E-mount eXperience.
3. “E” is chosen because of the flange focal distance (mount-to-sensor distance) of eighteen (18) mm.
4. With E-mount lenses, Intelligent AF (where the scene is continuously monitored for changes to ensure fast contrast detection AF) will kick in. This works in both still photo and movie shooting.
5. The E-mount lenses feature Optical SteadyShot image stabilization.
6. During MF or DMF mode, you can rotate the focus ring to enlarge the image on the LCD by 7 or 14x.
7. NEX-5 can record HD movies in either AVCHD (1920 x 1080 @ 59.94i / 50i) or MP4 (1440 x 1080 @ 29.97 / 25 fps). 60i or 50i / NTSC or PAL depends on where you bought the camera.
8. NEX-3 records HD movies in MP4 (1280 x 720 @ 29.97 fps).
9. The 3D Sweep Panorama photo is created by generating two shots – 1 for each eye – thus there’s no need for 2 lenses.
10. The 3D photo uses the Multi-Picture Format. On a non 3D-capable TV, the JPEG file is displayed instead.
11. The firmware to enable 3D Sweep Panorama function will come in July, downloadable via Sony’s website.
12. The Auto HDR function now captures and combines 3 photos into 1 for a maximum of 6 EV between exposures.
13. Other than the final HDR photo, an additional photo (the 2nd of the 3 shots) is saved.
14. The NEX works with Apple’s iMovie.
15. The NEX has only a single card slot, but it’s compatible with both Memory Stick and SD cards. SDXC is supported.
16. The NEX is compatible with Eye-Fi cards, including the latest Pro X2 card.
17. An optional optical viewfinder attachment (FDA-SV1) is available.
18. An optional mount adapter (LA-EA1) lets you use your A-mount lenses (manual focus) on the NEX. But not with the 2 A-mount teleconverters.
19. The new E-mount 18-200mm F3.5-6.3 OSS lens has an additional Active mode that also exists in some of Sony’s latest Handycam camcorders. Active mode allows the lens to shift over a greater range of motion, thus enabling even greater camera shake compensation.
20. 2 converters are available for use on the E-mount 16mm F2.8 wide-angle lens. The VCL-ECU1 is an ultra wide converter (~12mm effective focal length). The VCL-ECF1 is a fisheye converter (~10mm effective focal length).