Photorumors received a rumor saying that “Sony will introduce two DSLR models at the CES show in Las Vegas between January 7th and 1oth, 2010: Alpha 450 and a successor to the Alpha 700 (not clear what will be the exact model number). The Alpha 450 will not have video capabilities (the a700 replacement is also not expected to have built-in video).“

Just for fun: Sony 2010 roadmap! (Remember it is almost certainly a FAKE and purely invented roadmap). But we are a rumor site and we like to dream a little bit ;)

An interesting article appeared in the forum Dyxum.
The last line of this article reads: “Just do not ask me how I found it …”
True or not – time will tell.
So …

NAB, Las Vegas, 10-15 April 2010:
Sony will present A1000. It will be a revolutionary hybrid SLR and vmdeokamery. Ie like RED system is roughly the same in appearance and price. 32 megapixels and HD video.
It is expected the new lens 28-300mm SSM, “shtatnik ideal for cameras and a new hybrid.
Will show the new camera lines A2xx and A3xx (smaller and cheaper ongoing) and new superbyudzhetnaya A150 camera without a system avtofukusirovki (this is something new).

Interesting note.
Too beautiful, something to be true. Especially troubling time with accurate prices. And this in an unpredictable crisis:).
And PMA 2010 is missing.

Thanks Pieter for sending the link! 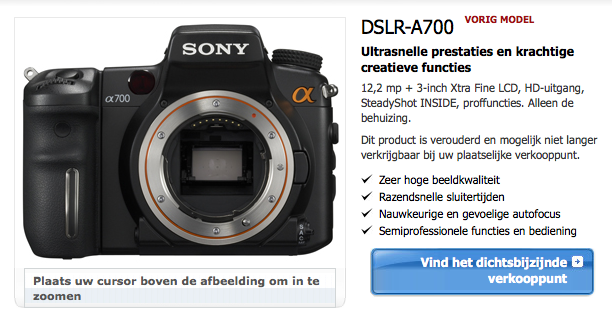 Sony UK just updated their website and listed the A700 as “previous model”.

“…Recently, a 10M pixel CMOS image sensor with high image quality, providing more than 70dB dynamic range, and high-speed read-out of 576M pixels/s (10M pixels at 50 frames/s) has been developed. This sensor can also be operated in a 6M pixel mode at 60 frames/s with a 16:9 aspect
ratio. This imager has been realized using two important technologies: the column ADC, and the back-illuminated structure.

…In the future, the performance of the digital camera is expected to improve tremendously with the evolution of the CMOS image sensor. There are many â€œkey milestonesâ€ in this evolution, such as â€œ3Dâ€, â€œ4KÃ—2Kâ€, â€œglobal shutterâ€, and so on.”

Sony UK just updated their website and listed the A700 as “previous model”. Expect the Sony A700 successor to be unveiled in Q1!